DHS wants to use human body odor as biometric identifier, clue to deception 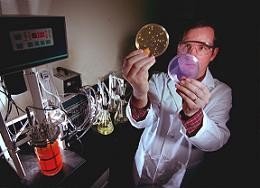 WASHINGTON, March 9 (UPI) -- The U.S. Department of Homeland Security plans to study the possibility that human body odor could be used to tell when people are lying or to identify individuals in the same way that fingerprints can.

In a federal procurement document posted Friday on the Web, the department's Science and Technology Directorate said it would conduct an "outsourced, proof-of-principle study to determine if human odor signatures can serve as an indicator of deception. … As a secondary goal, this study will examine … human odor samples for evidence to support the theory that an individual can be identified by that individual's odor signature."

Officials said that the work was at a very early stage, but the announcement brought criticism from civil liberties advocates who said it showed the department's priorities were misplaced.

The procurement notice said the department is already "conducting experiments in deceptive behavior and collecting human odor samples" and that the research it hopes to fund "will consist primarily of the analysis and study of the human odor samples collected to determine if a deception indicator can be found."

"This research has the potential for enhancing our ability to detect individuals with harmful intent," the notice said. "A positive result from this proof-of-principle study would provide evidence that human odor is a useful indicator for certain human behaviors and, in addition, that it may be used as a biometric identifier."

The directorate "is trying to determine what factors of human behavior and chemistry can provide clues to the intent to deceive," she said, adding that the work would be carried out by the Federally Funded Research and Development Center run by the non-profit Mitre Corp., which conducts cutting-edge research for U.S. military, homeland security and intelligence agencies.

Barry Steinhardt, director of the ACLU's technology and liberty project, told UPI that the plan showed the department had "misplaced priorities."

"The history of DHS' deployment of these technologies has been one colossal failure after another," he said. "There is no lie detector. This research has been a long, meandering journey, which has taken us down one blind alley after another."

Steinhardt added that even well-established biometric-identity technologies like fingerprinting have resulted in individuals being inaccurately identified, like Oregon lawyer Brandon Mayfield, who got an apology from the FBI after being wrongfully accused of having had a hand in the 2004 Madrid rail bombings.

"None of the biometrics for identity have worked very well, with the possible exception of DNA," he said, adding that even fingerprint evidence was "increasingly being challenged in courts around the country."

"This shows the misplaced priorities (of DHS)," he said. "The government doesn't need to take us down another blind alley."

Research published by the Royal Society in London in 2006 found "a substantial number of marker compounds (in human sweat) that can potentially differentiate individuals or groups."

Researchers took five samples each from 179 individuals over a 10-week period and analyzed them, finding hundreds of chemical markers that remained more or less constant for each individual over time.

An analysis of these compounds "found strong evidence for individual (odor) fingerprints," the researchers concluded.

However, they warned that some individuals appear to have less distinctive odors than others, adding that "the reason for the variation in distinctiveness is unclear." More importantly, some individuals' odors changed during the course of the study. "Not all subjects had consistent marker compounds over time, which might be due to physiological, dietary or other changes," the researchers concluded.

The researchers also cautioned that some of these marker compounds might be "exogenous chemical contaminants" from skin-care or perfume products or tobacco smoke and other substances present in an individual's environment. About a quarter of the 44 apparently distinctive marker compounds they were able to analyze appeared to be artificial contaminants, the researchers said.

"Determining the origins of individual and sex-specific odors -- and controlling exogenous chemical contaminants -- may provide the most important challenge for future … studies," the researchers said.

Those challenges are likely to be significant, and they will multiply if the techniques are deployed in the field.

"While some of these sensors perform well in the lab, the real world may be different," technology consultant and author John Vacca said. "The technology is still in its infancy."