Qualified to run the country? 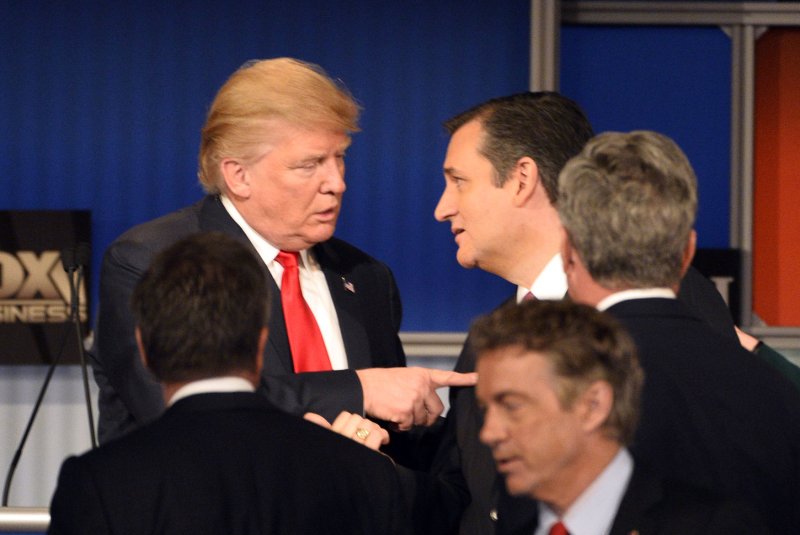 At this moment, and it may quickly fade, four candidates are the leading contenders to win the Republican presidential nomination next year: Donald Trump, Ben Carson, Marco Rubio and Ted Cruz.

In terms of experience, none brings extraordinary or even entry-level qualifications to serve as the nation's chief executive. Two have no government experience, which to some Americans is important, and no one would choose a surgeon with such an empty resume. And two have not served enough time in the U.S. Senate to warrant an experienced stamp of approval.

On temperament, readers can make up their minds. But, in terms of the only absolute requirements for president specified in the U.S. Constitution, clearly one candidate fails muster. The Constitution requires only four qualifications for president. That person must be at least thirty-five years old, reside for at least fourteen years in the country, receive a majority of Electoral College votes, and be a "natural born citizen."

"Natural born" has been interpreted as having been born in one of the United States. No case law, or the Founding Fathers, explicitly defined the explicit meaning of "natural born." And there have been certain anomalies. Charles Curtis, Herbert Hoover's Vice President, was born in Kansas in 1860 a year before it became a state. Barry Goldwater was born in Arizona in 1909, three years before it was granted statehood. Neither was challenged. A more relevant case was John McCain's presidential candidacy in 2008.

McCain was born at Coco Solo Naval Base in the Panama Canal Zone in 1936 to American parents and a father who was a naval officer stationed there in command of a submarine. In 1937, Congress enacted 8 USC1403 that granted full citizenship to children born of parents in the U.S. military serving in the Canal Zone. In 2008, one Fred Hollander challenged McCain's qualification in court and lost. In addition, before the 2008 election, the U.S. Senate unanimously passed a resolution declaring McCain a natural born citizen.

Ted Cruz was born in Calgary, Canada of an American mother and a non-American Cuban father. No matter how the meaning of "natural born" may be twisted and distorted, it is impossible to see how Cruz qualifies constitutionally. Ironically, the Republican "birthers," particularly Donald Trump, accused Barack Obama of being born in Kenya and hence not eligible to become president, but they have maintained remarkable silence over Mr. Cruz's birthplace.

Many will argue that this constitutional mandate is well past its sell-by date. But so are other constitutional strictures. The Seventh Amendment, for example, states that any legal case involving more than $20 can be heard by a jury. And, of course, the first words of the Second Amendment, "A well regulated militia....," have been ignored by courts in granting citizens virtually unlimited rights to bear and carry arms.

Surprisingly, the issue of Cruz's birth has not been discussed beyond low-level warning shots.

Republicans clearly are waiting to see who actually emerges as the nominee and Cruz is still a long shot. Democrats are lying in wait not wising to expend valuable political ammunition in advance. With the furor over Bush v. Gore case that awarded the presidency to the loser of the popular vote, one can imagine what will happen if Cruz wins the nomination and then is taken to court over his eligibility. Conceivably, the bottom of the ticket -- the vice presidential candidate -- might be elevated to the top slot. Bizarre, yes, but so has American politics evolved in strange ways.

The larger issue rests on the judgment, character and experience of the candidates of both parties. To certain Republicans, especially of the center -- maybe a group on the verge of extinction -- none of the four appear electable. Since Democrats have an advance edge in electoral votes, nominally being assured of at least 240 of the necessary 270, and with Republicans seemingly quite happy to neglect women and minorities, winning the White House in 2016 seems a bridge too far for the GOP.

Despite the polling that still puts Trump and Carson in the lead, the campaign is highly volatile and almost certain to change dramatically. Hillary Clinton is still not clear of the e-mail controversy that potentially could wreck her candidacy. Still, the question of Cruz's eligibility to be president is something that should be decided sooner than later. And Cruz would be wise not to count on the Senate voting to declare him natural born as it did for McCain. _______________________________________________________________________ Harlan Ullman is Chairman of the Killowen Group that advises leaders of government and business and Senior Advisor at Washington DC's Atlantic Council and Business Executives for National Security (BENS). His latest book is A Handful of Bullets: How the Murder of Archduke Franz Ferdinand Still Menaces the Peace.

Commentary: Arnaud de Borchgrave // 6 years ago
Suppose Obama is right about the Islamic State
How many Islamic State fighters are determined jihadis willing to die, and how many are part-time mercenaries who, if conditions change, will disappear?

Commentary: Arnaud de Borchgrave // 6 years ago
We have met the enemy and he is us
Americans must understand that while danger exists, exaggerating that danger makes our enemies stronger and amplifies their perverted, siren-like call for attracting more recruits. Tragically, fear has become a greater menace than the actual threat of terrorism.

Commentary: Arnaud de Borchgrave // 6 years ago
Delusional and desperate - The latest Republican presidential debate
A well-informed American public is the best antidote to the candidates' ill-conceived and often dangerous ideas. But how can or will Americans become better informed? That question is tragically unanswerable.

Commentary: Arnaud de Borchgrave // 6 years ago
Jeremy Corbyn Trump?
Donald Trump is rapidly becoming the Republican Party's equivalent of Britain's Labor Party leader Jeremy Corbyn. The question is whether Trump's destructive personality and rhetoric will do to the GOP what Corbyn has done to disintegrate Labor.

Commentary: Arnaud de Borchgrave // 6 years ago
Needed: Strategy, not slogans, to defeat the Islamic State
Today marks the 74th anniversary of Japan's surprise attack on Pearl Harbor. That attack was designed to "shock and awe" an isolationist America into an early negotiated surrender after its Pacific Fleet battleships were sunk or put out of action by the Imperial Japanese Navy, giving Japan free license to expand its East Asian Co-Prosperity Sphere as far as it liked. But the outcome was not the one expected by the military dictatorship in Tokyo.

Commentary: Arnaud de Borchgrave // 7 years ago
Can Obama avoid LBJ's Vietnam mistakes in Syria and Iraq?
At best, the coalition is not losing the war against IS. At worst, as the Communist and Nazi parties succeeded in turning Russia into the Soviet Union and Germany into Hitlerism, IS could spread its Caliphate to other states in the region. This is not another hypothetical Domino theory that got us into so much trouble in Vietnam. But it is plausible and should worry us greatly.

Commentary: Arnaud de Borchgrave // 7 years ago
Running mates: Bush 41 and 43's biggest mistakes?
Speculation over the consequences of a Powell vice presidency under either Bush 41 or 43 is intriguing. Would the disasters following September 11th been averted or minimized? The latest book by 43 suggests the answer would have been yes.

Commentary: Arnaud de Borchgrave // 7 years ago
In, out or in-between: Obama's foreign policy
ABU DHABI, United Arab Emirates, Nov. 5 (UPI) -- The White House has announced that it is reviewing its military options for what was once the intention of "disrupting and destroying the Islamic State" in Syria and Iraq. Critics (or realists) have argued that the Obama administration has already chosen to withdraw from the Middle East in favor of a strategic pivot to Asia and the president's aversion to being trapped in the quagmire that is consuming Iraq, Syria, Libya and Yemen. No one can fault Mr. Obama for attempting to avoid committing billions or trillions of dollars and U.S. lives to another failed enterprise.

Commentary: Arnaud de Borchgrave // 7 years ago
Is NATO relevant or is it finally a relic?
"I think it's possibly the beginning of the end of the North Atlantic Treaty Organization. I think it's that serious. We just can't sit back and let this happen."
Advertisement