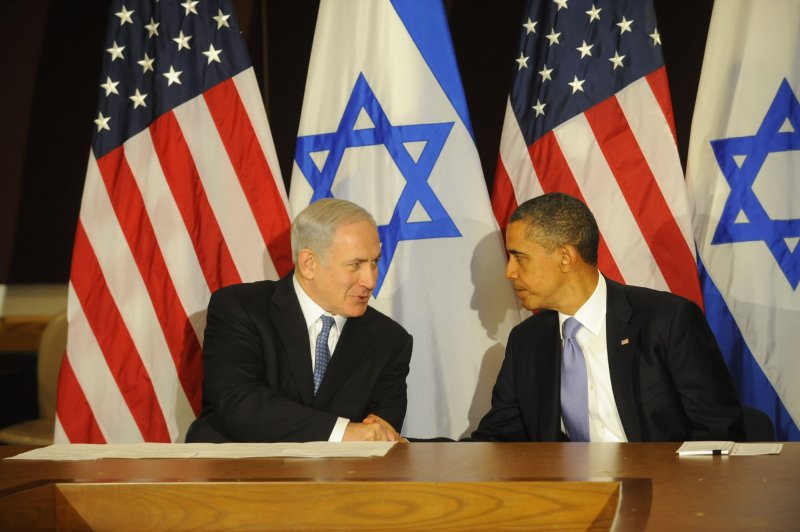 WASHINGTON, March 1 (UPI) -- U.S. three-star generals and admirals, Defense Intelligence Agency and CIA sources, along with three former CENTCOM commanders and the three former chiefs of Israeli intelligence services who retired last year -- a formidable array of military and civilian experts who share impressive expertise on the Middle East -- are all waving a red flag against unilateral Israeli or bilateral U.S.-Israeli bombing of Iran's nuclear installations.

They can see such actions triggering a wider conflict spreading to the entire Middle East and the rest of the Arab world.

Such a maelstrom wouldn't further anyone's objectives, least of all Israel's. Iran's restless people, for the most part anxious to get rid of their theocratic dictatorship, would quickly close ranks with the regime.

A three-star with much recent experience in the Middle East says an Israeli strike could move the entire region in the wrong direction.

Iran can close the Strait of Hormuz, not just for a few hours, as the Israelis say, but long enough to drive oil prices into the stratosphere. An admiral with years of experience in the region at different times of his career said privately Iran can sow thousands of mines in an area that handles one-fifth of the world's daily oil requirements. They are below the surface and can be detonated by remote control as a warship sails over them. Iran's shore line, which covers the entire eastern side of the Persian Gulf, is pock-marked with concealed missile sites.

The Iranians would also use hundreds of small boats in a swarming configuration that U.S. warships are prepared to cope with -- but one or two are bound to get through a curtain of fire and punch a hole in the hull of a U.S. or NATO minesweeper.

Such a small boat in Aden harbor in October 2000 punctured the hull of the USS Cole, a $1 billion Arleigh Burke class destroyer, killing 17 sailors, and putting the warship out of service for 18 months with a $220 million repair bill. Cost of the operation to al-Qaida: $10,000 plus three volunteer suicide bombers.

The response of Israeli naysayers is that such tactics would hurt Iran far more than any of its intended targets. U.S. generals and admirals respond that the Iranian leadership wouldn't be averse to cutting off its nose to spite its face.

The Iranians can also absorb temporary belt-tightening far more readily than Western Europeans. And with gas at the pump suddenly selling at $10 to $15 a gallon, U.S. President Barack Obama's updated resume wouldn't look too appealing at the ballot box in November.

U.S. Navy 5th Fleet headquarters in Bahrain is vulnerable; two-thirds of its population is Shiite Muslim and rooting for Tehran in the current conflict.

The Iranian aviary is also well stocked with hawks and super hawks with distinguished plumage. Next week's White House meeting of Israel's Binyamin Netanyahu with Obama was preceded by an impressive fly-by of hawks, fearful of being ignored.

Former CIA Director Jim Woolsey told Newsmax's Ronald Kessler, the United States should keep its powder dry but "send five carrier battle groups (that's half the total number available) to the Indian Ocean with B-1s and B-52s and B-2s to Diego Garcia and go Teddy Roosevelt one better and don't just speak softly. Don't say a word and they'll get the idea."

When the balloon goes up, "this air power," says Woolsey, "should be prepared to take out their ability to close the Strait of Hormuz and to take out as much as one can of the ballistic missile program, the nuclear program, the training camps of the Quds Force, and everything related to the Revolutionary Guard."

At the same time, says Woolsey, the United States should "crack down finally, totally, and completely on the Iranian Central Bank, using all of the financial instrumentalities, including the Swiss system."

But leave the regular Iranian navy and army alone, Woolsey adds. And to Chairman of the Joint Chiefs of Staff Gen. Martin Dempsey who described Iran as a "rational actor," Woolsey says Iranian leaders are no different than Adolf Hitler.

Some of their leaders want to wipe Israel off the map and "start a war that would end the world."

President Mahmoud Ahmadinejad, explains Woolsey, "may be behaving quite rationally given that objective. … I would say that objective is stark raving mad."

Most Iran watchers in the intelligence community say that one Israeli or U.S. bomb on Iran would push Iran's youthful protesters right into the arms of the government they despise.

The former CIA chief also says that Islamist extremist penetration among moderate Muslims in U.S. mosques is the biggest single danger the United States faces, greater than communism ever was.

Woolsey gathers a stateside consensus when he says if Iran is allowed to develop a nuclear weapon, "you'll not have to wait a day before the Saudis, the Turks and the Egyptians are busily constructing reactors and, under the Nuclear Non-Proliferation Treaty, saying they have every right to enrich uranium, and thereby embark on a nuclear weapons program."

Former U.N. Ambassador John Bolton, a super hawk of more recent lineage, says it's bombs away now. "Military strikes against key points in the Iranian fuel cycle are necessary to head off a nuclear Iran," he said.

More important than his meeting with Obama is Netanyahu's speech to the annual AIPAC convention. The endorsement of the American Israel Public Affairs Committee, Washington's most powerful lobby, is tantamount to solid congressional approval.

Commentary: Arnaud de Borchgrave // 6 years ago
Suppose Obama is right about the Islamic State
How many Islamic State fighters are determined jihadis willing to die, and how many are part-time mercenaries who, if conditions change, will disappear?

Commentary: Arnaud de Borchgrave // 6 years ago
We have met the enemy and he is us
Americans must understand that while danger exists, exaggerating that danger makes our enemies stronger and amplifies their perverted, siren-like call for attracting more recruits. Tragically, fear has become a greater menace than the actual threat of terrorism.

Commentary: Arnaud de Borchgrave // 6 years ago
Delusional and desperate - The latest Republican presidential debate
A well-informed American public is the best antidote to the candidates' ill-conceived and often dangerous ideas. But how can or will Americans become better informed? That question is tragically unanswerable.

Commentary: Arnaud de Borchgrave // 6 years ago
Jeremy Corbyn Trump?
Donald Trump is rapidly becoming the Republican Party's equivalent of Britain's Labor Party leader Jeremy Corbyn. The question is whether Trump's destructive personality and rhetoric will do to the GOP what Corbyn has done to disintegrate Labor.

Commentary: Arnaud de Borchgrave // 7 years ago
Needed: Strategy, not slogans, to defeat the Islamic State
Today marks the 74th anniversary of Japan's surprise attack on Pearl Harbor. That attack was designed to "shock and awe" an isolationist America into an early negotiated surrender after its Pacific Fleet battleships were sunk or put out of action by the Imperial Japanese Navy, giving Japan free license to expand its East Asian Co-Prosperity Sphere as far as it liked. But the outcome was not the one expected by the military dictatorship in Tokyo.

Commentary: Arnaud de Borchgrave // 7 years ago
Can Obama avoid LBJ's Vietnam mistakes in Syria and Iraq?
At best, the coalition is not losing the war against IS. At worst, as the Communist and Nazi parties succeeded in turning Russia into the Soviet Union and Germany into Hitlerism, IS could spread its Caliphate to other states in the region. This is not another hypothetical Domino theory that got us into so much trouble in Vietnam. But it is plausible and should worry us greatly.

Commentary: Arnaud de Borchgrave // 7 years ago
Running mates: Bush 41 and 43's biggest mistakes?
Speculation over the consequences of a Powell vice presidency under either Bush 41 or 43 is intriguing. Would the disasters following September 11th been averted or minimized? The latest book by 43 suggests the answer would have been yes.

Commentary: Arnaud de Borchgrave // 7 years ago
In, out or in-between: Obama's foreign policy
ABU DHABI, United Arab Emirates, Nov. 5 (UPI) -- The White House has announced that it is reviewing its military options for what was once the intention of "disrupting and destroying the Islamic State" in Syria and Iraq. Critics (or realists) have argued that the Obama administration has already chosen to withdraw from the Middle East in favor of a strategic pivot to Asia and the president's aversion to being trapped in the quagmire that is consuming Iraq, Syria, Libya and Yemen. No one can fault Mr. Obama for attempting to avoid committing billions or trillions of dollars and U.S. lives to another failed enterprise.
Advertisement