A news section of the Federal Bureau of Investigation (FBI) website shows an update listing Osama bin Laden as Deceased in Washington, DC, on May 2, 2011. At 11.35 last night President Obama announced "the United States has conducted an operation that killed Osama bin Laden, the leader of al Qaeda, and a terrorist who's responsible for the murder of thousands of innocent men, women, and children." UPI/Roger L. Wollenberg | License Photo

Michael Henry II, aged 6, holds American Flags as he visits the Pentagon's 9/11 memorial in Arlington, Virginia on May 2, 2011. Late last night President Obama announced al-Qaida leader Osama bin Laden, who was largely responsible for the terrorist attacks on the Pentagon and World Trade Center in New York, was killed by US Special Forces. His father was a Capitol Hill staffer and biked to the Pentagon on the night of September 11, 2001. UPI/Roger L. Wollenberg | License Photo

Front pages headlines from around the country that announce the death of Al-Qaida terror leader Osama bin Laden are seen in front of the Newseum in Washington on May 2, 2011. UPI/Kevin Dietsch | License Photo

The compound where al -Qaida chief Osama bin Laden was hiding is shown surrounded by hills in Abbottabad, Pakistan on May 2, 2011. Osama bin Laden was killed by U.S. special forces in a firefight it was announced by U.S. President Barack Obama on May 1, 2011. UPI/Sajjad Ali Qureshi | License Photo

Flowers and flags are placed on the fence surrounding Ground Zero, the site of the former Twin Towers, hours after Osama Bin Laden is killed by U.S. Navy Seals almost 10 years after the terrorist attacks on the World Trade Center at Ground Zero in New York on May 2, 2011. UPI/John Angelillo | License Photo

WASHINGTON, May 3 (UPI) -- Osama Bin Laden established close bonds with Pakistan's Inter-Services Intelligence agency during the Soviet occupation of Afghanistan. Al-Qaida -- "the base" -- was set up by bin Laden to keep track of volunteers flocking in from all over the Arab world to fight the Soviets.

Following the 1989 Soviet defeat and withdrawal from Afghanistan, bin Laden went home to Saudi Arabia where he quickly fell afoul of the royal family for objecting to the arrival of U.S. troops in 1990 to repel the Iraqi invasion of Kuwait.

Expelled from Saudi Arabia, he found exile in Sudan and began organizing al-Qaida by contacting veterans of the Afghan campaign. Under U.S. pressure, Sudan expelled bin Laden and he opted to go to Afghanistan. No Western power objected.

In Afghanistan he immediately joined forces with Mullah Omar, the Taliban leader who had just occupied Kabul after emerging victorious from the civil war that followed the Soviet withdrawal. Pakistan's ISI was Mullah Omar's principal foreign support. Taliban was ISI's creation, designed to give Pakistan "defense in depth" in the event of an Indian invasion.

RELATED Bin Laden raid will 'go down in history'

In the spring of 2001, six months before 9/11, Mullah Omar and bin Laden were joint commencement speakers at the "University for the Education of Truth," a sprawling madrassa in Khattak (on the main road from Islamabad to Peshawar). On June 4 that same year, this reporter and UPI's South Asian consultant Dr. Ammar Turabi, met with Mullah Omar in Kandahar.

It quickly became clear Omar was beginning to find bin Laden's presence overbearing, Thousands of jihadis from all over the Arab world and other Muslim countries were training in some 20 camps. Omar complained openly about "a man who talks too much and issues fatwas for which he has no religious authority."

After the U.S. invasion of Afghanistan Oct. 7, 2001, bin Laden ordered his followers to repair ASAP to a series of interlocking caves in a mountain base -- Tora Bora -- that straddled the border with Pakistan and had already played a key role in the war against the Soviets.

Under a constant pounding by B-52 bombers -- some 700,000 pounds, including 15,000-pound Daisy Cutters, between Dec. 4 and 7 -- bin Laden emerged Dec. 9 with some 50 fighters. A fleet of SUVs met them at the exit of the Tirah Valley and drove off in the direction of Peshawar.

Turabi and this reporter had been tipped by a prominent tribal leader in the region -- one with 600,000 pairs of eyes and ears -- where to meet the bin Laden escapees. We arrived Dec. 11 and missed the group by two days. But there was still no Pakistani blocking force in the area as the Pak army said there was.

For the past 10 years, bin Laden has enjoyed the protection of ISI's Section "S," which officially doesn't exist. These are preselected intelligence and special ops officers who retire officially and then take up new duties in Section S. A retired ISI source told this reporter that this system is the umbrella of plausible deniability.

Pakistan has all the earmarks of a split personality. Part of the country's intelligence apparatus has cooperated and unknown parts haven't. The Pakistani establishment sees 65 percent of Americans against the war in Afghanistan. It also knows that America's 44 allies in Afghanistan can't wait to get home. They originally signed up to assist their American friends in the wake of 9/11, fully expecting to be out of Afghanistan in six to nine months, not six to nine years.

Unspoken but firmly believed by Pakistan's powers that be is the return to power in Kabul of a reformed Taliban, with equal rights for women, and shedding its medieval form of government. The guarantor? Pakistan.

Osama bin Laden's demise is an emotional victory for the United States but countless millions of Pakistanis and millions of others in Muslim countries will convince themselves that this is a yet another CIA/Mossad conspiracy; that bin Laden is still alive.

After all, hundreds of millions still believe 9/11 itself was the original conspiracy between U.S. and Israeli intelligence, designed as it was to push back the frontiers of Islam and provide a pretext for getting closer to Pakistan's nuclear arsenal and seizing it.

Even Western-educated Pakistani conspiracy buffs feed off some of the more bizarre U.S. retaliatory capabilities.

The sad truth about bin Laden's burial at sea is that it will have little impact on the global war on terrorism. Al-Qaida and Associated Movements have never been dependent on an iconic Osama bin Laden. They operate in the new world of the Internet and the wider jihadist movement in a global electronic caliphate.

Texting and tweets is their new language. How to make a bomb in ma's kitchen makes for more exciting reading in their online magazine "Inspire" than having to learn the Koran by heart in Arabic over 10 years, as young boys do in Pakistan's 12,500 single-discipline madrassas.

Osama bin Laden's demise is a great victory for the skill and courage of the intelligence community and U.S. Navy SEALs. It is also a global wake-up call for reassessing the global balance of forces, drawing the proper lesson from China's 5.8 million civilian workers on building projects abroad (including 1 million in Africa) versus America's priorities that keep 350,000 soldiers overseas in some 700 bases and facilities.

While the United States spent blood and treasure to the tune of $1 trillion in Iraq and $500 billion in Afghanistan over the past 10 years, a budding superpower in the east is taking a leaf out of the Marshall Plan. 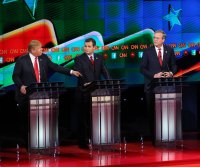 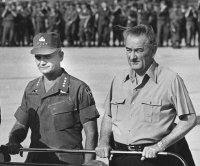 Commentary: Arnaud de Borchgrave // 5 years ago
In, out or in-between: Obama's foreign policy
ABU DHABI, United Arab Emirates, Nov. 5 (UPI) -- The White House has announced that it is reviewing its military options for what was once the intention of "disrupting and destroying the Islamic State" in Syria and Iraq. Critics (or realists) have argued that the Obama administration has already chosen to withdraw from the Middle East in favor of a strategic pivot to Asia and the president's aversion to being trapped in the quagmire that is consuming Iraq, Syria, Libya and Yemen. No one can fault Mr. Obama for attempting to avoid committing billions or trillions of dollars and U.S. lives to another failed enterprise.
Advertisement