Commentary: War and peace in Mideast

A view of Iran's first nuclear power plant is seen after it was opened by Iranian and Russian engineers in Bushehr, Iran, south of Tehran on August 21, 2010. Russia said it will safeguard the plant to prevent material from the site from being used to make nuclear bombs. UPI/Maryam Rahmanianon | License Photo

WASHINGTON, Aug. 25 (UPI) -- Although the Mideast peace process is important, said Elliott Abrams' invitation, there is something more important in that part of the world.

Members of the Friends of Israel initiative are even more concerned about the onslaught of radical Islamism as well as the specter of a nuclear Iran, both of which threaten the entire world, the invitation from Abrams, who served in senior positions in two Reagan and three Bush (41 and 43) administrations, said.

Not exactly a propitious environment for resuming Israeli-Palestinian peace talks despite 19 months of shuttling between the two sides by Special Envoy George Mitchell. For most Arabs in the Middle East and Muslims everywhere, including the United States, the treatment of West Bank Palestinians by Israel was a major contributing factor to 9/11. And for the others, 9/11 was a Mossad-CIA conspiracy to force the United States into a still closer alliance for a global war against terrorists.

Now a senior fellow at the Council of Foreign Relations, Abrams was issuing an invitation to a mid-September lunch and a discussion with the leaders of the "Friends of Israel Initiative," former Spanish Prime Minister Jose Maria Aznar and former Peruvian President Alejandro Toledo. The only American member mentioned in the invitation is John Bolton, former ambassador to the United Nations and a super hawk who frequently finds himself to the right of Israeli Prime Minister Binyamin Netanyahu.

Anyone who has followed Palestinian peace initiatives closely over the past generation knows that a "contiguous and viable" Palestinian state in a two-state solution with Israel is less viable and less contiguous than at any time in recent memory. Below the radar improvements in Jewish settlements in the West Bank continued throughout the 10-month moratorium decreed by Netanyahu.

Israelis reporters spotted some 600 housing units in 60 settlements (out of 130), including 223 permanent structures, under construction during the moratorium that ends officially Sept. 23. Israel also controls 85 percent of Palestinians' water aquifer. So to see the emergence of an independent Palestinian state in the West Bank is diplomatic chimera.

But the mirage has kept many peace process professionals going with what psychoanalysts call "spatial IQ," or an individual's ability to mentally rotate, flip or piece together images in their imagination without the use of physical objects.

Some 300,000 Jewish settlers in the West Bank aren't about to see their homes negotiated away to a mythical Palestinian state, in which one of the two principal political parties wants Israel off the map.

As tensions grow between Iran and Israel, the Mideast focus has gradually shifted yet again from peace to war.

Iran's military theocracy seems to be going out of its way to provoke Israel into attacking its nuclear facilities. "Iran hails missile launch as symbol of enemy's defeat," said a Financial Times headline. Some of Tehran's extremist hotheads may welcome Israeli bombs as an opportunity for general mayhem in the Persian Gulf and what they believe would be a chance to seize the leadership from traditional, hereditary regimes that rely on U.S. naval and air dominance to prevail in the gulf.

Iran's latest military bragging rights came in the form of a missile with "new technical features and unique tactical capabilities," Defense Minister Ahmad Vahidi said. The local television demonstration coincided with the activation of Iran's first nuclear power plant after three decades of delay when the Soviet Union and then Russia had its foot on the brake.

Russian uranium is the key ingredient to generate 1,000 megawatts of electricity. Ali Akbar Salehi, head of Iran's Atomic Energy Organization, said the Bushehr plant's activation is "a thorn in the eye of ill-wishers" at a time of tightening U.N. economic and financial sanctions.

Today, said Salehi, the new missile "has turned into the symbol of the defeat of the enemy's strategy and will." U.S. officials say they believe Iran has enough fissile material to build two nuclear weapons, which Tehran denies vociferously. It's only aim, Iran keeps repeating for an increasingly skeptical Western opinion, is the peaceful use of nuclear energy.

With Turkey, India, Japan, China and South Korea still making lucrative trade deals with Iran, President Mahmoud Ahmadinejad and his clerical and military supervisors scoff at the U.N.'s fourth round of sanctions.

Netanyahu isn't willing to wait for the first unguided Iranian missile to strike Israel. The Obama administration has used its most powerful voices to quietly dissuade Israel from starting something the United States will have to cope with from the Strait of Hormuz to Kuwait to the entire length of the Iran-Iraq border. Iran's asymmetrical response is bound to impact U.S. interests from Oman through Abu Dhabi, Dubai, Qatar, Bahrain, Saudi Arabia, Kuwait and Iraq. Iran can also cause major trouble for the U.S. and NATO forces in western Afghanistan.

Thus, the United States could suddenly find itself involved in three wars -- instead of one in Afghanistan, which U.S. President Barack Obama is attempting to wind down. But any kind of an Israeli raid against Iran's nuclear facilities is bound to put more than financial markets into a tailspin.

Anthony Cordesman, one of America's pre-eminent strategic thinkers, says the United States will remain dependent on imports for roughly 40 percent of its liquid fuels in 2035. So shoring up the gulf's defenses against Iran's asymmetrical threats remains an urgent U.S. priority.

Some $50 billion in new U.S. arms sales to the Saudis, including 84 new Boeing F-15s, 60 Apache gunships, 72 Black Hawks, upgrading 70 existing Saudi F-15s and Patriot missile batteries, will ensure Saudi dominance over the Persian Gulf for the next decade. But it will be five to 10 years before the Saudis assimilate all this hardware. Until then, it will be up to what is still the world's only superpower, fed up though its people are with foreign military entanglements.

Elliott Abram's letter of invitation to a Council on Foreign Relations luncheon in honor of prominent members of the "Friends of Israel Initiative" clearly enjoyed his endorsement. But while he explained what the "Friends" stand for and what they are raising the alarm about, quotations made it appear that these were also Abrams' views. He now says they are not. Arnaud de Borchgrave apologizes for attributing the views of "Friends of Israel" to Abrams. 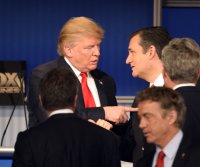 Commentary: Arnaud de Borchgrave // 6 years ago
Can Obama avoid LBJ's Vietnam mistakes in Syria and Iraq?
At best, the coalition is not losing the war against IS. At worst, as the Communist and Nazi parties succeeded in turning Russia into the Soviet Union and Germany into Hitlerism, IS could spread its Caliphate to other states in the region. This is not another hypothetical Domino theory that got us into so much trouble in Vietnam. But it is plausible and should worry us greatly.

Commentary: Arnaud de Borchgrave // 6 years ago
Running mates: Bush 41 and 43's biggest mistakes?
Speculation over the consequences of a Powell vice presidency under either Bush 41 or 43 is intriguing. Would the disasters following September 11th been averted or minimized? The latest book by 43 suggests the answer would have been yes.

Commentary: Arnaud de Borchgrave // 6 years ago
In, out or in-between: Obama's foreign policy
ABU DHABI, United Arab Emirates, Nov. 5 (UPI) -- The White House has announced that it is reviewing its military options for what was once the intention of "disrupting and destroying the Islamic State" in Syria and Iraq. Critics (or realists) have argued that the Obama administration has already chosen to withdraw from the Middle East in favor of a strategic pivot to Asia and the president's aversion to being trapped in the quagmire that is consuming Iraq, Syria, Libya and Yemen. No one can fault Mr. Obama for attempting to avoid committing billions or trillions of dollars and U.S. lives to another failed enterprise.
Advertisement