WASHINGTON, Jan. 22 (UPI) -- The 9.2 magnitude earthquake that triggered the 2004 Indian Ocean tsunami claimed some 230,000 lives in 13 countries. But the Port-au-Prince 7.0 quake may exceed that toll in one small country. Haiti's capital will have to be rebuilt from the ground up, like German and Japanese cities after World War II. For a city of 3 million that was designed to handle a mere 50,000, there was little modern infrastructure to begin with. But it will still cost billions.

Fighting two trillion-dollar wars abroad while millions are jobless at home doesn't make much sense to well over half the American people. How many favor something closer to home has not been polled.

There is a growing chorus of geopolitical deep thinkers and intellectuals who favor a strategic retreat from the imperial posture of the Cold War, where we are now fighting terrorist cells on a planetary scale, and a reassessment of priorities. One of the Democratic Party's champion fundraisers, speaking privately, said, "At times I feel that we're exhausted, sitting on the sidewalk, applauding the inevitable as Team China marches by."

We are now saddled with a dysfunctional system of government that raises the key question for the 21st century: Have we allowed ourselves to become ungovernable with a Congress that seems prone to micromanage everything into unworkable policies, courtesy of a system that has moved from no child left behind to no lobbyist left behind.

No fewer than 108 congressional committees and subcommittees claim oversight on the Homeland Security Department, up from 88 in 2004. Countless reports have recommended a single point of congressional contact for DHS. But DHS is still required to produce more than 500 annual reports in addition to more than 6,000 individual requests for information per year. Scores of DHS employees are employed full time catering to Congress. The British, German and French governments would have ground to a halt under a similar deluge of parliamentary requests.

If we're going to be successful in Afghanistan, a long-term commitment of five to 10 years is an essential prerequisite. Pakistan does not believe today's America will sustain such an undertaking, notwithstanding repeated pledges about the long haul commitment from national security adviser James L. Jones, frequent travelers to Pakistan Chairman of the Joint Chiefs Adm. Mike Mullen and CENTCOM Commander Gen. David J. Petraeus, Secretary of State Hillary Clinton, and this week from Defense Secretary Bob Gates.

From his 27 years in the CIA where he is still the only one to rise from level-entry recruit to director, Gates remembers vividly the era of close cooperation with Pakistan when he was deputy director of the CIA. It was that partnership, which included Saudi Intelligence chief Prince Turki al-Faisal, that forced the Soviets to withdraw from Afghanistan in February 1989 and heralded the downfall of the Soviet empire nine months later. It also led Osama bin Laden to believe that his Arab mujahedin recruits toppled one evil empire and that he had a shot at toppling the remaining one -- imperial America.

Gates disagreed strenuously with the subsequent shabby treatment of our Pakistani ally, including painful economic and military sanctions, as punishment for their secret nuclear weapons program. A whole generation of Pakistani officers was banned from U.S. military facilities and staff colleges. This triggered a long-lasting anti-U.S. culture in the Pakistani military. The trust deficit is still huge. And the lessons of America's defeat in Vietnam 35 years ago lurk just below the surface; it was the U.S. Congress that pulled the plug.

China is only too happy to hold America's coat as it sinks deeper into expensive geopolitical commitments while Chinese leaders win friends and influence people in Asia, Africa, Latin America and a large part of North America (Mexico and Canada). China is also building an ultramodern infrastructure of roads, railroads and airports that is in sharp contrast to America's long-neglected public services, water supplies, power grid, road and rail networks, and air traffic control.

In Afghanistan, a Chinese company is investing $3 billion in Logar province near Kabul to mine 240 million tons of copper ore, worth $88 billion. One must assume they are not worried by the Taliban. The insurgents confide in their Pakistani friends they will need the income when they get back in the saddle. China has 11 nuclear power plants and is planning to add 24. The last U.S. reactor went online in 1997. Only 27 percent of 253 ordered in the 1950s are in operation.

More than 100,000 Chinese students are now studying in the United States. There was a time when most of them would have tried to stay; now they see more exciting horizons in China. Thousands of U.S. schools stopped teaching foreign languages since Sept. 11, 2001, according to a government-funded survey. But there is one significant exception: Chinese. Beijing is sending language instructors abroad and pays for their room and board, presumably also to proselytize for the new superpower.

The electoral cataclysm in Massachusetts, where Democrats lost a seat they held for 47 years, is a major game changer in Congress, but abroad, it's yet another demonstration of fickle unpredictability.

Foreign policymakers see that President Obama's magisterial, turning-a-new-leaf policy for, among other achievements, a Palestinian state in the Middle East was a bridge to nowhere. Israel's Netanyahu put his foot down.

If a Middle East solution continues to elude Obama, as it surely will, what leads him to believe that he can be successful in Afghanistan? Ranking Pakistanis privately say they don't believe he can.

Since October 2009 some 30,000 Pakistani troops have been battling Pakistani Taliban guerrillas in South Waziristan, one of the seven tribal areas along the Afghan border. Heavy snow has now forced a halt in operations. Gen. Ashfaq Parvez Kayani told Gates it would take another six to 12 months to complete. Not good enough for Gates -- and Obama's national security team.

Because that still leaves North Waziristan as a safe haven for Afghan Taliban operating against U.S. and NATO forces in Afghanistan. These are the insurgents originally trained by Pakistan's Inter-Services Intelligence agency to take over Afghanistan in the mid-1990s. Off the record, knowledgeable Pakistanis can see them back in power, posing as moderates, after NATO and U.S. governments tire of fighting an invisible enemy. 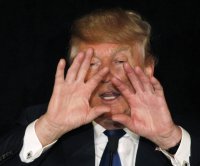 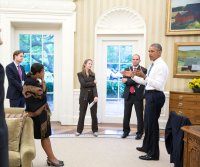