Commentary: Is Pakistan another Iran?

WASHINGTON, April 27 (UPI) -- U.S. President Obama's foreign policy gurus are baffled by Pakistan's anarchic chaos that is sweeping one of the world's eight nuclear powers. Secretary of State Hillary Clinton said she had trouble understanding why the Pakistani army isn't moving to suppress Taliban insurgents inching closer to the capital city of Islamabad.

After six decades of independence -- and half that time under military dictatorship -- Pakistan is still a largely feudal society where landless Taliban have started an uprising against the landlords who back the inept government of President Asif Zardari. It is hard to imagine that he enjoys much support in the budding showdown between Pakistan's haves and have-nots. He says Pakistan is in a state of war without defining the enemy. For the Taliban and Pakistan's landless millions, the enemy is Pakistan's political establishment and the feudal estates that enjoy government protection.

Pakistan is increasingly a rerun of the Islamic fundamentalist revolution in Iran that ousted the pro-Western regime of Shah Mohammed Reza Pahlavi in 1979 and proceeded to execute some 7,000 "counterrevolutionaries" in a few months, thousands more than were sentenced to death during the emperor's 40 years on the Peacock throne. The Iranian equivalent of Pakistan's Taliban -- revolutionary Islamist students -- seized the U.S. Embassy and kept 52 U.S. citizens hostage for 444 days.

To understand the angry growl of Pakistan's 170 million people, look at the number of Taliban (students) that are graduated from Pakistan's 12,500 madrassas, the free-board Koranic schools. They grind out some 2 million teenage boys a year. They are the sons of small or landless peasants who cannot afford the fees of proper schools; most Pakistanis subsist on $2 a day. Besides free food, clothes, books and notebooks, many are promised jobs in mosques or other madrassas. They learn Arabic and the Koran (by heart), an education based on memorization of medieval texts to the exclusion of analytical skills. "It's the ossification and stagnation of knowledge," harrumphed one Pakistani professor. And countless millions of young Pakistanis have been similarly brainwashed.

Many join the ranks of Pakistan's professional army. And they believe that shooting at Taliban insurgents in the Swat Valley or Buner, 60 miles from Islamabad, or the seven Federally Administered Tribal Areas that abut the Afghan border, is tantamount to killing the soldiers of Allah. For them, Islam is the only true religion. The others are heretical enemies that are on the warpath against Islam. That was drilled into most of them for 10 consecutive years, from age 6 to 16.

Under tremendous U.S. pressure to take action against the Taliban and al-Qaida in FATA, the army saw 1,400 killed and 4,000 wounded in 2007-2008. Their heart was not in it. They were fighting their own people. The army negotiated cease-fires with the Taliban that were promptly broken. Unknown numbers of Taliban guerrilla fighters then moved out of FATA and into the 70-mile Swat Valley, the country's most popular tourist area, in Pakistan proper. There, too, the army grew tired of killing its own citizens, and the Zardari government conceded defeat and allowed the Taliban to impose Shariah law, a strict Islamic code of justice that allowed the public beating of a 17-year-old girl who was seen talking to a man she was not related to. Her screams were caught on a video that was widely shown around the world.

Then black-turbaned Taliban insurgents, rocket-propelled grenade rifles and AK-47s slung over their shoulders, pushed their luck and moved into the neighboring Buner district, 60 miles northwest from the seat of government in Islamabad. Clinton and special envoy for AFPAK Richard Holbrooke raised a cry of alarm and leaned on Zardari and Army Chief of Staff Gen. Ashfaq P. Kayani to take action. But Clinton also conceded some U.S. responsibility for sowing the seeds of Islamic extremism as a means of undermining the Soviet occupation of Afghanistan in the 1980s. Today's Taliban are the sons of yesterday's mujahedin guerrillas.

The Pakistani government responded by dispatching eight platoons of paramilitary troops to shore up its authority. Taliban militants ignored them and went about terrorizing a population of half a million. All music was banned. Barber shops were closed and men were instructed to grow their beards to the regulation length measured by holding one fist under the chin. From the age of 7, all girls were ordered to wear burqas, the ambulatory-tent look. Taliban enforcers rode around in stolen vehicles.

Stung to the quick by U.S. criticisms, Kayani ordered helicopter gunships to attack Taliban guerrillas after they ambushed a convoy of security forces in the Lower Dir district. But in downtown Islamabad, pro-Taliban religious extremists were back in charge of the Red Mosque after their leader -- Maulana Abdul Aziz, arrested as he escaped an army siege in burqa camouflage -- was released from prison. More than 100 were killed on both sides before the army prevailed in July 2007.

One Urdu-language TV channel called the Taliban "mazahmat kaar," the latest translation for "resistance fighters." State-controlled PTV labels them with a halo of respectability, "askaryet pasand," a flowery translation for "militant" that makes them sound like a distant Tupamaros threat in Uruguay. In the towns and villages they occupied, they killed local policemen, even an army general in the medical corps.

By week's end, it became increasingly clear Pakistan was spinning out of control with a discredited, ineffectual government that the army did not seem inclined to save for the benefit of corrupt politicians. Waiting in the wings was Nawaz Sharif, head of the Pakistan Muslim League, twice prime minister, who presided over Pakistan's first nuclear test explosions in 1998 (in response to India's) and was deposed by Army Chief Pervez Musharraf in 1999. The son of a wealthy industrial family, Nawaz was sentenced to 10 years of exile, which he chose to serve in Saudi Arabia. Among his assets were 15 major properties that ranged from steel, paper and spinning mills to an engineering company and vast land holdings.

Zardari served more than 11 years in prison on corruption charges but proudly says he was never convicted. Similarly plagued by accusations of corruption throughout his two stints as prime minister in the 1990s, Nawaz still enjoys a huge following. Nearly a million people responded to his recent call to block Zardari's attempt to depose Nawaz's brother Shahbaz as chief minister of Punjab and to reinstate Chief Justice Iftikhar Mohammad Chaudhry. Zardari backed down on both counts.

The Taliban's religious fanatics, meanwhile, continue to gnaw at Pakistan's body politic, much the way they did in Iran before the ayatollahs overthrew the shah 30 years ago. 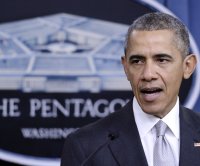 Commentary: Arnaud de Borchgrave // 5 years ago
In, out or in-between: Obama's foreign policy
ABU DHABI, United Arab Emirates, Nov. 5 (UPI) -- The White House has announced that it is reviewing its military options for what was once the intention of "disrupting and destroying the Islamic State" in Syria and Iraq. Critics (or realists) have argued that the Obama administration has already chosen to withdraw from the Middle East in favor of a strategic pivot to Asia and the president's aversion to being trapped in the quagmire that is consuming Iraq, Syria, Libya and Yemen. No one can fault Mr. Obama for attempting to avoid committing billions or trillions of dollars and U.S. lives to another failed enterprise.
Advertisement

Six more killed in clash between rebels and Congo army