PARIS, Nov. 18 (UPI) -- France is on the verge of a "social explosion," the country's top regional administrators warned the government in a leaked confidential report.

"A steadily mounting number of bankruptcies and forced redundancy plans are having a marked effect," said the report, issued by the prefects, top civil servants who since Napoleon's day have been the arm of the government in all the regions of France.

"And as the bad news continues to build, there is an atmosphere of pain and despair. There is a lack of hope for the future and this is fertile territory for a social explosion in France," they warned.

Leaked to the conservative newspaper le Figaro, the report added to the sense of crisis that seems close to engulfing the government of Socialist President Francois Hollande. Already the least popular French president in more than 50 years, he has lost support in his own party with majorities of Socialists telling pollsters it is time for a change.

No less than 91 percent of respondents in the latest IFOP national poll said they wanted either a change of government or dramatic changes in policy. And 85 percent of Socialist voters agreed. It is an open secret that party chiefs are urging Hollande to replace his prime minister. The weekly news magazine l'Express claimed in a cover story this week that Hollande had become "a pilot of a plane whose controls no longer respond to his commands."

Jeered and whistled at by protesters at the Arc de Triomphe during Remembrance Day ceremonies Nov. 11, and with France's credit rating downgraded yet again, Hollande appears weak, indecisive and clueless as France sinks back into recession. A brief promise of renewed growth in the summer has given way to another quarter of falling economic activity.

But the political activity is intense, not least in Brittany, where local opposition to the latest eco-tax on heavy goods vehicles has spawned what one newspaper called a "jacquérie," a peasants' revolt. Tax-collection points have been burned and hundreds of the widely hated speed cameras have been destroyed.

That kind of destruction has taken place at night and in secret but the public face of the protests has been very cleverly marketed. They call themselves the "Bonnets Rouges" -- the Red Bonnets -- after a 17th-century protest against the war taxes of the Sun King, Louis XIV. The Bonnets Rouges march in the streets, block roads, demonstrate in front of the Prefectures and claim the traditional mantle of their region's long opposition to the overbearing taxes and power of Paris.

In their confidential report, the prefects warned that roadside cameras installed across France to monitor traffic for the new eco-tax had become symbols of fiscal oppression, sparking demands that they be "removed before they are all destroyed."

But they went on to suggest that public hostility goes far beyond the new green tax, with hauliers, farmers and small businesses going bankrupt under the weight of taxes and social charges. Unless the taxes are cut, the prefects warned, France should expect much more trouble and even violent opposition.

Under the new EU rules on cutting budget deficits, the French government has already imposed $30 billion in next taxes this year. It has also announced plans to impose an extra $4 billion in taxes next year, raising the value-added tax to 20 percent and adding a new top rate of 75 percent tax on incomes of more than 1 million euros. The government will then be taking in taxes 46.5 percent of gross domestic product.

"We will turn Brittany into Hollande's cemetery, before he kills off our economy," chanted the Bonnets Rouges in the city of Quimper, as 30,000 of them defied tear gas to battle police, pelting them with stones and flowers pots.

Their spokesman is an elected mayor of a small town, Christian Troadec, who also directs an organization called "Vivre, décider et travailler en Bretagne" -- "To live, decide and work in Brittany" -- which seeks more powers for local government and for the return of another province, Loire-Atlantique, to Brittany.

In Paris, he is seen as a closet nationalist with an agenda for eventual Breton independence like the leaders of Scotland and Catalonia.

Troadec claims, however, to be a proud Frenchman, who values are "based on social solidarity, liberty, equality and fraternity." He has stressed his opposition to the far-right National Front leader Marine Le Pen, who herself sported a bonnet rouge in a blatant attempt to hijack the movement that is spreading across France.

In region after region, the speed cameras and eco-tax collection points have been vandalized and hauliers used their trucks to block highways over the weekend, in a spasm of popular unrest that includes far right, far left, labor unions, farmers and unemployed.

One symbol of the popular mood can be found in the current issue of the free magazine offered to travelers on the Eurostar fast train between Paris and London. "Tired of paying French taxes?" it asks. Come to London, where company taxes are just 20 percent, social charges are 9 percent and income taxes peak at 40 percent -- rather than the 75 percent coming in France. 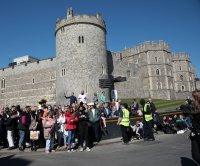 World News // 2 hours ago
Prince Philip laid to rest in St. George's Chapel
April 17 (UPI) -- Millions of people around the globe watched Saturday as Prince Philip, the longest-serving consort of a British monarch, was laid to rest at Windsor Castle in a small funeral limited by COVID-19 restrictions.

Odd News // 15 hours ago
Family's scenic route home from vacation leads to $777,777 lottery prize
April 16 (UPI) -- A Virginia family said taking the scenic road home from their vacation led them to the store where they bought a lottery ticket and won a $777,777 jackpot.