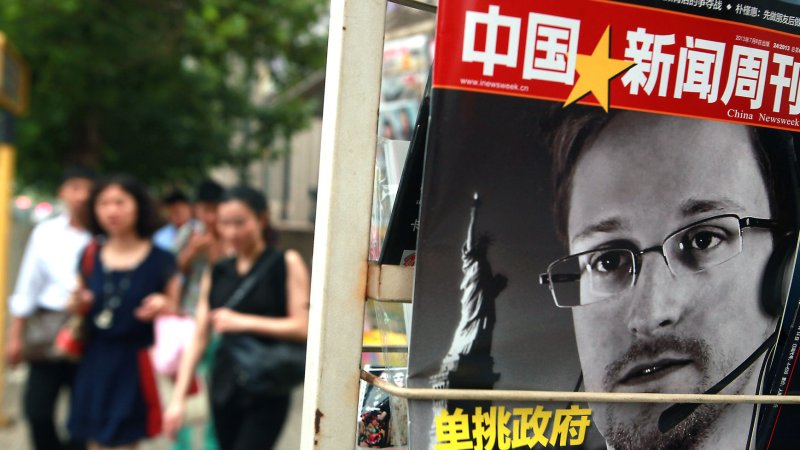 If Edward Snowden had surfaced first in Brussels rather than in Hong Kong, maybe everything would have been different. He could have applied for asylum at the European Parliament.

They are already calling him to testify, along with National Security Agency chief Gen. Keith Alexander and two other NSA whistle-blowers, Tom Drake and William Binney, in hearings designed to lead to new data privacy rules and data-sharing agreements between Europe and the United States.

The cultural divide between Europe and the United States has been thrown into sharp relief by the Snowden revelations of the extent of NSA's data-monitoring program, including the bugging of European embassies in Washington and at the United Nations in New York.

The NSA's PRISM program, under which the U.S. authorities are said to have access to foreigners' communications, through companies like Apple, Google, Facebook and Yahoo!, has added to the furor. The reaction has been particularly fierce in Germany, where 500 million German communications are allegedly monitored each month by the NSA. The anguished history of the intrusive monitoring by the Stasi secret police in the former East Germany helps explain the depth of German reaction.

"The U.S. has massively and systematically violated the civil rights of people who have no possibility of voting against the practice in elections" charged Jakob Augstein, Germany's most eminent journalist, publisher and editor of the weekly magazine Der Spiegel.

"We stop being citizens and turn into subjects," Augstein went on, adding that he felt "the uncomfortable feeling of powerlessness one gets in surreal dreams."

His magazine, Germany's top seller, has been leading the charge against the NSA surveillance and against the low-key response of Chancellor Angela Merkel and the German government.

"Merkel is not powerless, she just doesn't care," Der Spiegel claims, arguing (as does the Social Democratic candidate for the chancellorship, Peer Steinbrueck) that Merkel has violated her oath to protect German citizens.

Martin Schultz, president of the European Parliament, said he was "deeply worried and shocked" by the reports of NSA spying on EU offices in Brussels and Washington and warned of "a severe impact" on U.S.-European relations, suggesting that the current talks on a new trans-Atlantic free trade pact should be put on hold.

The European Parliament has also posted resolutions calling for the exchange of banking and air passenger data with the United States.

"If the media reports are accurate, this recalls the methods used by enemies during the Cold War," commented German Justice Minister Sabine Schnarrenberger. "It is beyond comprehension that our friends in the U.S. see Europeans as enemies."

The point isn't that Europeans are seen as enemies by the NSA but as a potential source of hostile action; for example, in the way so many of the original 9/11 terrorists were connected through the mosque in the German city of Hamburg.

And the Europeans are deeply divided, with the official British reaction much calmer, reflecting the close liaison between the NSA and Britain's Government Communications Headquarters, which has allegedly been used to monitor the communications of U.S. citizens on NSA's behalf, to circumvent U.S. constitutional safeguards. Germany's own intelligence services work closely with their U.S. and British counterparts.

Despite the criticisms of Merkel, who has faced angry challenges in the Bundestag, the German Parliament, she insists that she is putting "appropriate pressure" on Washington and "we made it clear that answering our catalog of questions is important to us."

Her government is proposing a new trans-Atlantic treaty on data protection and privacy along with a charter of digital rights. She sent Interior Minister Hans-Peter Friedrich to Washington, who returned claiming that he had learned that the NSA's efforts had prevented 45 terrorist attacks, 25 in Europe and five of them in Germany. But then he told a parliamentary committee that this was all too secret to reveal any details. His announcement was mocked in the German media as "Mickey Mouse numbers."

Frank-Walter Steinmeier, former foreign minister and now leader of the opposition in the Bundestag, said the issue came down to three essential questions: "What does our government know? What actions are still in operations what is Chancellor Merkel doing to German interests. We need answers now."

Politics are playing a role in the matter with Germany facing elections in September, and two-thirds of German respondents telling pollsters they aren't satisfied with their government's reaction. The Social Democrats and Greens have been given an issue to put Merkel on the defensive. And now Glenn Greenwald, the Guardian journalist who first reported the Snowden revelations, has told German TV to expect "explosive" new revelations from his trove of 9,000 NSA documents provided by Snowden.

Along with the controversy over the prisoners in Guantanamo and executions by missiles fired from drones, the NSA affair has finally broken the German and in some ways then European love affair with Barack Obama. As Der Spiegel put it: "Before, we could at least think, 'It's just Bush. There is a better America.' But now we know; there is only one America."

The Issue: Do we still have a right to privacy? Journalist warns of 'explosive' news from cache Snowden leaked

Odd News // 24 minutes ago
Loose emu captured in Missouri neighborhood
Feb. 7 (UPI) -- Animal rescuers in Missouri said an emu was captured after multiple days on the loose thanks to local residents who cornered the flightless bird in a yard.

Science News // 38 minutes ago
Number of unprovoked shark bites worldwide drops to 57 in 2022
It's a little safer to get into the water: Unprovoked shark attacks dropped to a 10-year low worldwide in 2022, shark watchers say.

U.S. News // 2 hours ago
State of the Union: Biden to declare 'state of the economy is strong'
Feb. 7 (UPI) -- President Joe Biden will deliver his second the State of the Union address Tuesday night at the U.S. Capitol, where he is expected to tout his economic achievements over the past two years.
Advertisement