LONDON, April 1 (UPI) -- This is a great year for anniversaries, from the battle of Gettysburg in July to the assassination of Kennedy 50 years ago in November and the Battle of the Nations at Leipzig 200 years ago that really sealed Napoleon's fate. With 600,000 soldiers engaged, it was Europe's largest battle until World War I.

But it is also just 50 years since the British minister for war, John Profumo, lied to the House of Commons about his relations with a young woman called Christine Keeler. While having a brief affair with Profumo, she was simultaneously having an affair with the military attache at the Soviet Embassy, Yevgeni Ivanov.

Throughout the months of April and May in 1963, Profumo maintained his lie that there had been "no impropriety" in his relations with Keeler. Many in London society knew otherwise, including Viscount William Astor, who owned the Cliveden estate where Profumo first met Keeler as she arose nude from the swimming pool.

Astor also owned the Observer national newspaper and his younger brother David Astor was its editor, so many in the media had reason to believe that Profumo had lied. Rumor abounded, gossip swirled and the opposition Labor Party dropped heavy hints and leading questions until the pressure on Profumo became intolerable. On June 5, Profumo had to confess to Parliament (and to his prime minister) that he had lied and resigned his post.

It wasn't immediately clear that this sexual entanglement posed any serious security risk. Indeed, Profumo noted to his friends that if in the course of their encounters Keeler had suddenly asked about military matters, his suspicions rather than his libido would have been aroused.

Peter Wright, a counter-intelligence official from MI5 who was allowed to question Keeler when she was arrested on charges of perjury, had no such doubts. While he found her poorly educated and ill-informed on public events, he noted that at one point she used the terms "nuclear payload." This was not then a term in common parlance and Wright reported to the government that in his view there had been a real security risk at the heart of the Profumo affair.

Keeler was a busy young woman, since she was also at the time involved with a Jamaican drug dealer called Lucky Gordon and with another West Indian, a petty criminal called Johnny Edgecombe. The two men fought over her and she fled. When Keeler was hiding in the London apartment of society osteopath Stephen Ward, Edgecombe tried to break in to see her, firing several shots at the door.

These were the events that triggered the Profumo scandal, Profumo's forced resignation, the fall of the government of Prime Minister Harold Macmillan, the supposed suicide of Stephen Ward and the launch of the glossy myth of Swinging London.

Its cultural significance, as the end of one era of British rectitude, class distinction and hypocrisy and the launch of "permissive" society was best summed up by the greatest English poet of the day, Philip Larkin.

"Between the end of the 'Chatterley' ban

"And the Beatles' first LP."

The Chatterley ban was a reference to the obscenity trial the previous year, in which D.H. Lawrence's novel, "Lady Chatterley's Lover," was allowed to be published for the first time in Britain on the grounds of redeeming artistic merit.

The Beatles need no explanation. Their first album, with titles like "Love Me Do" and

"Please Please Me," was dominating the airwaves in the same weeks that scurrilous tales of Christine Keeler's sexual adventures dominated the newspapers.

Sex, drugs and rock 'n' roll came together in a heady cocktail with high politics and London lowlife and at least in the popular memory, Britain was never quite the same again. It was much more fun, rather less stuffy and something shifted in the social system.

When Macmillan resigned as prime minister in October of that year, he was replaced by Alec Douglas-Home, who had to give up his title as the 14th Earl of Home in order to take the job, which required him to sit in the House of Commons. He didn't last long. With the year he lost a general election and was replaced by a moderate socialist from Yorkshire who liked to mock Douglas-Home's aristocratic credentials by referring to himself as the 14th Mr. Wilson.

Wilson had ruthlessly exploited the affair to embarrass the government, insisting "there is a security threat" and claiming that it all represented "the sickness of an unrepresentative sector of our society" by which he meant the ruling classes and the corruption of their rule. "There is something utterly nauseating about a system which pays a harlot 25 times as much as it pays a prime minister," Wilson told Parliament.

But there was at the same time a real security scandal unfolding. In January 1963, the Middle East correspondent for the Observer newspaper disappeared from Beirut. His name was Kim Philby and after a long and distinguished career in British Intelligence MI6, rising to be its representative in Washington in the early years of the Cold War, he had been recalled and eased out amid growing and well-founded suspicions that he had been a Soviet agent since the 1930s.

It was in July 1963, as John Profumo began his new career and penance cleaning the toilets at a charity for the poor in London's East End, and when the Beatles went to see a new band called the Rolling Stones perform at The Scene in Great Windmill Street, that it was formally announced that Philby had defected to the Soviet Union.

World News // 16 minutes ago
Seoul expands coronavirus checks to all China passengers
Jan. 24 (UPI) -- South Korea is taking no chances on the deadly new coronavirus originating from Wuhan, China, and is to screen all passengers arriving from China ahead of the Lunar New Year holidays.

Health News // 33 minutes ago
One-third of 'critical workers' not getting enough sleep
More than one-third of working Americans don't get enough sleep, and the problem is greatest among the police, the military, health care workers and truckers, researchers report.

World News // 43 minutes ago
The tale of KAL Flight 858, how woman who bombed it walks free
Jan. 24 (UPI) -- Even more unusual than the possible discovery of a plane wreckage three decades after it was bombed is the story of the North Korean woman responsible who now walks free.

Science News // 43 minutes ago
Geologists figure out what fuels 'slowquakes'
Jan. 24 (UPI) -- Researchers have identified the origins of slow earthquakes, or slowquakes, a unique type of earthquake discovered just 20 years ago. 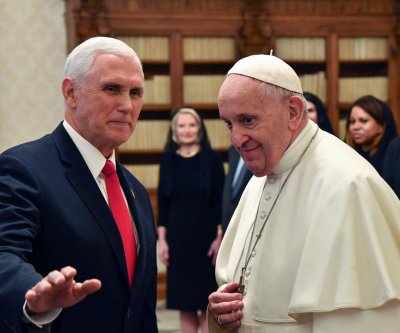 World News // 2 hours ago
Coronavirus: Chinese officials say 26 dead among over 900 verified cases
Jan. 24 (UPI) -- Chinese health officials said Friday at least 26 people have now died from the outbreak of a coronavirus, which has led authorities to lock down a number of cities in a desperate bid to keep it from spreading.