Outside View: A new dictator takes Iraq to the brink 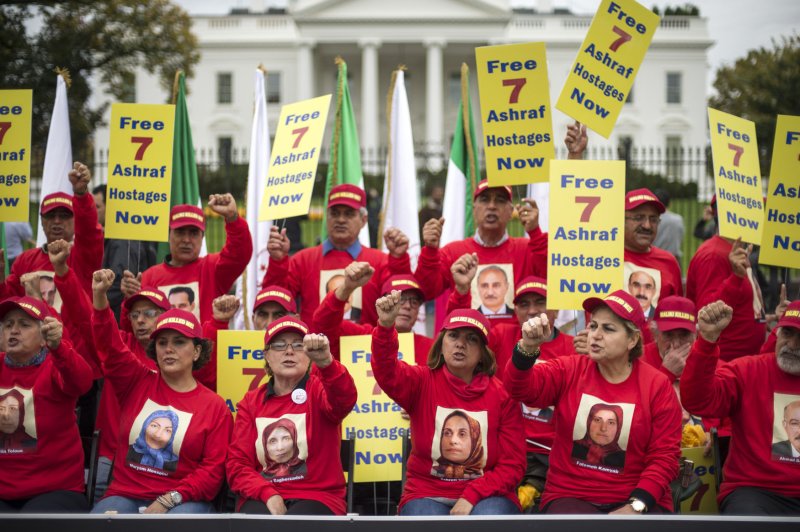 Iranian supporters participate in a rally at the White House against Iraqi Prime Minister Nuri al-Maliki and his alleged killing of 52 Iranian dissidents at Camp Ashraf in Iraq, on November 1, 2013 IN Washington, D.C. President Obama is scheduled to meet with Maliki today in the Oval Office. UPI/Kevin Dietsch | License Photo

EDINBURGH, Scotland, Dec. 31 (UPI) -- The violent arrest in Iraq of leading Sunni Member of Parliament Ahmed al-Alwani marks yet another step in that country's rapid descent into sectarian anarchy and civil war.

Alwani is chairman of the Iraqi Parliament's important Economics Committee. More significantly, he is a leading critic of Iraqi Prime Minister Nouri al-Maliki and an arch opponent of the spread of Iranian influence in Iraq.

He led recent demonstrations in Ramadi against the sectarian oppression of the Shiite-led government and wrote to EU High Representative for Foreign Affairs Catherine Ashton bewailing Iraq's appalling human rights record, citing the massacre of defenseless Iranian dissidents in a refugee camp near Baghdad as evidence of Maliki's malign rule.

The almost inevitable reaction from the increasingly despotic prime minister was a trumped-up charge of terrorism against Alwani and a large contingent of heavily armed troops, with 50 armored vehicles and a military helicopter were sent to arrest him at his home in a village in Anbar Province, at dawn Saturday. The ensuing carnage saw Alwani's brother and eight other family members and bodyguards shot dead and the MP himself dragged off to a prison in Baghdad.

Alwani's immunity from prosecution as an Iraqi MP was conveniently ignored by Maliki, who says charges of terrorism override any such constitutional niceties.

This is becoming routine for the Iraqi prime minister. Almost exactly a year ago, Iraq's Sunni Finance Minister Rafie al-Issawi had his home and offices raided by security forces. A total of 150 of his bodyguards and staff members were arrested on charges of terrorism, setting off widespread protests and demonstrations in the six predominantly Sunni provinces throughout the country.

This event followed the attempted arrest of Iraqi Vice President Tariq al-Hashemi, the day after U.S. troops pulled out of Iraq on Dec. 19, 2011. Hashemi, the most senior Sunni in the Iraqi government, was also a fierce critic of Maliki and an opponent of Iranian meddling in Iraq. His 13 bodyguards were arrested, tortured and sentenced to death. Hashemi himself has been sentenced to death in absentia no fewer than five times and lives in exile in Turkey.

The crackdown on leading Sunni politicians by the overtly Shiite prime minister seems to follow a clear pattern. Each time Maliki visits Tehran he receives instructions from his puppet master Ayatollah Ali Khamenei. This always involves ordering the arrest of another Sunni political leader when he returns to Baghdad.

Maliki also almost invariably initiates a military assault on the 3,000 People's Mujahedin of Iran refugees held in a prison-like camp near Baghdad. The PMOI is feared and loathed by the Iranian regime as its main political opponent and the mullahs repeatedly demand action from the Iraqi prime minister to annihilate the refugees.

So far the resulting bloody assaults by Iraqi forces have led to more than 130 deaths of these defenseless men and women, in repeated armed massacres and rocket attacks.

Seven hostages, including six women, were abducted by Iraqi SWAT teams on Sept. 1 and are being held in secret locations in Baghdad. One of the hostages was killed in Iraqi custody, Iranian media reported last week. The United States, European Union and United Nations, which signed over protection of these people to Iraq, refuse to intervene.

The most recent attack on the PMOI took place Friday, only days after Maliki returned from Tehran. Three refugees were killed and 71 wounded as a barrage of dozens of Katyusha rockets and ground-to-ground missiles rained down on Camp Liberty, near Baghdad airport.

The Iraqi government has meanwhile prevented the 3,000 PMOI refugees from taking delivery of their hard hats and armored vests, which were left behind in their previous home, Camp Ashraf.

More than 17,500 protective concrete T-walls were deliberately dismantled by Iraqi forces, to ensure the 3,000 refugees are sitting ducks for future bloody assaults.

Ominously and clearly also acting on instructions from Tehran, Maliki has allowed the free flow of Iranian and Hezbollah military personnel and equipment through Iraq to bolster the dictatorship of Bashir Assad in neighboring Syria.

The payback for Maliki's slavish submission to the mullahs' demands will be Iranian support for his re-election to a third term as Iraq's prime minister. Elections are due on April 30, although the increasing insurgency, sectarian conflict, abuse of human rights, corruption, torture, secret prisons and mass executions point to Maliki's defeat, unless, as is more than likely, he and his Iranian allies orchestrate massive electoral fraud.

The West, meanwhile, which stupidly supported Maliki, stands impotently on the sidelines as Iraq spirals toward civil war. It is time the United States, European Union and United Nations rediscovers its collective backbone. They have lamely spawned a new dictatorship in Iraq and are wringing their hands in frustration as that country becomes a failed state, with Iran poised to be the sole beneficiary.