Outside View: Wild and crazy guys 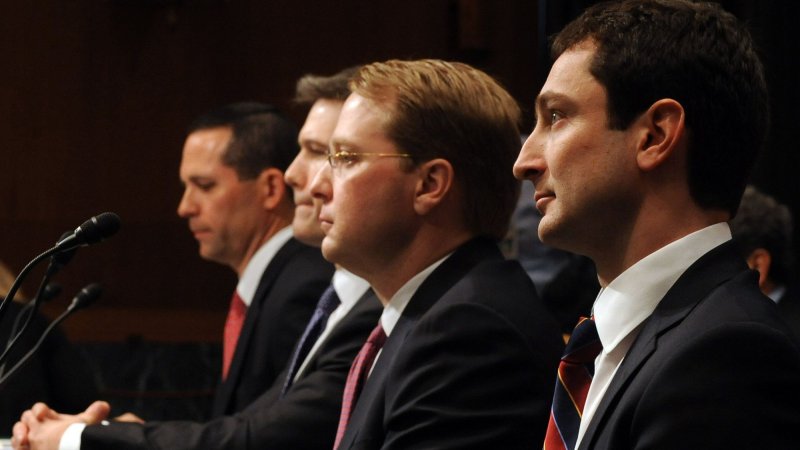 BRICK, N.J., May 11 (UPI) -- There is among the very, very rich, a mad desire to be wild and crazy guys capable of outrageous shenanigans. The 1 percent are at heart the 99 who just never had the chance to be themselves, their real selves.

They are thwarted at every turn, forced to conform to their lofty positions as obermenschen. They were most uncomfortable, not physically uncomfortable, their psyche is distressed. At their exclusive clubs, spas, hidden oasis where the 1 percent secret themselves to avoid their shame at being noticeably unlike the wild and crazy guys they so want to be, they sulk and whine and hope in a most forlorn way.

If only they had the chance to give some of their vast wealth to bankrupt school systems or deliver great boxcars full of food for the needy at the most pressing times. If only Warren Buffet could have his wish to pay more taxes and that money would be used for the common good. These sorts of things they would happily do. But they can't, their forever doomed to a bitter, unhappy separation from the rest of us.

Their punishment is to remain distant and aloof, never having done any wild and crazy guy stuff. Always yearning however to have just once spontaneously given an unsolicited gift of a million or two to some frail waif wasting away in some ghetto somewhere. But they can't.

They are compelled to observe every tax loophole their clever and high-priced accountants and lawyers find for them to keep ever more of their money. They dole out political contributions to members of Congress to make certain that tax laws are written to exclude them from the things they really want most, to be one of the boys, a crazy James Dean sort wild, drunk, in a Porsche doing 120 on a crummy desert road at night.

That's the spirit, only however the impoverished, or the middle class, who aren't really middle class because there is no middle class just minor degrees of less, get all that fun.

This country has always had the obermenschen who truly run it. The founding fathers were themselves quite well off. George Washington owned the largest whiskey distillery in the country. He was forced to fight a war over his distillery and of course fair trade. The quaint, although bloody, Whiskey Rebellion of 1791. Washington wanted everybody to have to pay the federal tax on booze he did. The moonshiners in Virginia and next door in West by God didn't pay taxes on their homebrew. That put George at a disadvantage. When Washington said they had to pay taxes like him, they rebelled, he sent in the army. The army crushed the rebellion and Washington was able to compete fairly.

The very rich live in a distant place not like our America. They don't watch the television shows that captivate, enthrall and provide escape that the 99 percenters do. They have great mansions, airplanes, big cars. Something like Downton Abbey's, but secret.

The 1 percent could, if they choose make this country a very different place. Just deciding to spread their wealth around, they a very large percentage of the wealth of this country, would make an enormous difference to the beleaguered in our society. Just think of the difference that could make if suddenly all that money was available for social services or healthcare for the sick and destitute. But they won't.

There is the curious holding among the very, very, rich, that they perform a service to the rest of us by stoking the fires of our ambition. They believe the example they set gives inspiration to achieve.

RELATED Outside View: What went wrong; what might go right?

The most remarkable thing about this country's arrangement with the very, very, is that they have for most of our history governed us. The presidency, with exceptions, has always gone to members of the established moneyed class.

Some have made it to the presidency from more common means. They are the exceptions and give that false hope, yet romantic ideal, that every young person can grow up to be president. That isn't nearly true.

Our presidents have overwhelmingly come from the obermenschen. Just take a look at our history and trace the lineage of the presidents. There are shocking inter-connects of families. Just the Roosevelts should be enough. The Northern patricians, the Southern aristocracy all connected by kinship. There are quite clear direct, or indirect, lines to the oligarchy that runs this place.

The presidency to this chummy bunch is something of a game, something to win, like a trophy, after getting everything else they could want more or less handed to them. The question is how can they know to govern when they know so little about what is necessary to redress?

There are observations that Mitt Romney seems oddly out of touch at times. He is no more out of touch than his predecessor George Bush, who came from the same oligarchy along with his father George W. George was Genghis Khan in a flight suit. He did not govern well. His was a disaster of a presidency and that is a charitable description.

The ruling class knows it is all something of a grand illusion. Romney is truly out of touch because his distance from us, from our world, is so great. He must use supreme effort to appear comfortable with the vernacular, the social context of which he knows little.

The fundamental issue is why we continue to be deluded into believing that great wealth makes no difference in how a president is to govern. That is an absurd conclusion but the one that prepares us for our continued illusion that that could be us maybe, or our kids maybe up there someday.

(Morgan Strong is a former professor of Middle Eastern and American history and was an adviser to CBS News' "60 Minutes" on the Middle East.)

Outside View // 7 years ago
President Obama's good intentions and bad outcomes
Washington may claim that it did not intended to subsidize Iranian support for terrorism or an increase of repression, suffering and abuse in Cuba, but those consequences are real and Raul Castro in Havana and the Ayatollahs in Iran have been emboldened.

Outside View // 7 years ago
How Donald Trump can short sell Mexico to become president
WASHINGTON, Aug. 18 (UPI) -- Donald Trump's plan to finance a border wall by withholding remittances may not be a campaign promise, but rather a means to obtain the presidency.

Outside View // 7 years ago
Countdown to disaster in Iran
BRUSSELS, Aug. 5 (UPI) -- Struan Stevenson: Iran's Supreme Leader has already breached a key clause in the pact. This pact should be rejected. The only way to make the world a safer place is to topple the corrupt mullahs and restore freedom and democracy to the beleaguered people of Iran.

Outside View // 7 years ago
EU Foreign Policy Chief Mogherini should not forgo human rights in Iran trip
The EU's High Representative for Foreign Affairs, Ms Federica Mogherini, plans to travel to Tehran on Tuesday to open a new dialogue on "bilateral issues" with Iranian officials a fortnight after the nuclear deal between Iran and the world powers. Yet her trip puts in peril Europe's democratic values.

Outside View // 7 years ago
Iran: Concessions will not bring peace, but aggravate crisis in region
BRUSSELS, June 28 (UPI) -- With the end-of-June deadline for a nuclear agreement with Iran fast approaching, prominent political and government leaders, past and present, from around the world are stepping up calls to beware of making concessions that would embolden the mullahs in Tehran and further destabilize the already shaky Middle East.
Advertisement