After adding 235,000 and 221,000 jobs in February and March, this should indicate the economy is finally accomplishing momentum. However, rising gas prices and sluggish consumer demand clouds the outlook. A surge in April first-time jobless claims indicate growth is stuck at depressed, first-quarter levels, and some businesses are growing more reluctant to hire.

The unemployment rate rose to 9 percent, as the Labor Department's estimate of the working age population and labor force increased by some 146,000 and 15,000, respectively. Immigration may have played some role -- warmer weather does encourage more border crossings to access work in the construction trade and agriculture.

Gains from February through April were in sharp contrast to weaker jobs creation the previous 13 months and largely resulted from stronger private sector jobs growth.

The economy began adding jobs January 2010 but gained only 78,000 jobs a month through January 2011. Too many of those jobs were created by stimulus spending, temporary business services and healthcare and social services, which are heavily subsidized by government reimbursements.

Core private sector jobs are so important because those have the potential to set off a virtuous cycle of hiring, consumer spending and more hiring. In February, March and April, this barometer of private sector vitality gained 222,000, 158,000 and 229,000 new positions, respectively. Similarly strong core private sector gains will be needed to continue adding 200,000 or more new jobs each month going forward and that would still not be enough to push unemployment down to acceptable levels.

Since the recovery began, the economy has expanding at a 2.8 percent annual rate. This is hardly enough to hold unemployment steady because the working age population increases 1 percent a year and productivity advances about 2 percent.

Coming out of a deep recession growth in the range of 4 to 5 percent is needed and possible to get unemployment down to 6 percent over the next several years.

Continued dependence on high-priced foreign oil, the growing trade deficit with China, and healthcare and tax policies that penalize the location of businesses in the United States are responsible for slower jobs creation than has been accomplished during past recoveries.

Simply, more jobs could be created by drilling for more domestic oil now, which would keep money here that American drivers send to the Middle East; taxing dollar-yuan conversion to offset China's undervalued currency and 35 percent subsidy on its exports; genuine healthcare reform that lowers drug, insurance, administration and tort burdens rather than subsidizing a system that costs 50 percent more than private systems in Germany and elsewhere; and replacing the corporate income tax and elements of the personal income and social security tax with a value-added tax.

(Peter Morici is a professor at the Smith School of Business, University of Maryland School, and former chief economist at the U.S. International Trade Commission.) 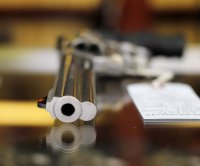