WASHINGTON, March 13 (UPI) -- Adm. Michael Mullen, chairman of the U.S. Joint Chiefs of Staff, said, "It's way past time to re-examine our strategic thinking about deterrence."

Conventional deterrence is all about how to posture America's air and naval forces, in particular, to safeguard allies and national interests without resorting to war. Make adversaries aware they'll pay a price for action, and it will boost the chance for peace.

The last few years have brought forth a wider set of goals for conventional deterrence against rising powers and rogue states. "Our goal is, in part, to reduce their ability to hold other nations hostage and to deny them the ability to project power," Secretary of Defense Robert Gates said.

Only one aircraft was designed to guarantee that option by staying ahead of evolving threats -- the Lockheed Martin/Boeing F-22 Raptor.

For example, commanders need intelligence, surveillance and reconnaissance at the start of a crisis. Formidable adversary air defenses could keep ISR platforms out. They'd also make it tough to intervene against states like Iran if called on to do so by the international community.

Even the U.S.-led North Atlantic Treaty Organization is facing renewed challenges. The F-22's abilities will be critical when U.S. forces are outnumbered or sent on extremely difficult tasks, such as hunting and tracking mobile missile launchers.

What's of concern is whether the United States is shaping the force to meet the demands of conventional deterrence in the next 20 years. Decisions made now affect the health of the conventional deterrent because competitors are moving ahead with sophisticated systems at a pace not seen since the Cold War.

If the U.S. Air Force's F-22 fleet remains stuck at 183 aircraft, it will put future conventional deterrence abilities at risk. Commanders may not have enough of these specially designed aircraft to defeat threats with confidence, and the overall fleet life will be used up years before it should be, due to heavy tasking.

Right now, the United States has the ability to stay ahead in the conventional deterrence game by upgrading its air power with the unique capabilities of the F-22. When production ceases, the door will close. It would take many years and billions of dollars to begin a new program to surpass the F-22. Long before then, the United States could see its policy options cramped by the limits of its own military power.

Shoring up a prime element of U.S. conventional deterrence -- its ability to conduct precise airstrikes anywhere -- will take not fewer than 250 F-22s, for the good of the nation and the world.

(Part 2: What makes the F-22 qualitatively different from its opponents)

(Rebecca Grant, Ph.D., is a senior fellow of the Lexington Institute, a non-profit public-policy research organization based in Arlington, Va.) 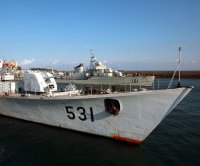