After Aleppo, Syria's rebels prepare for all-out war in north

By
James Bruce, The Arab Weekly 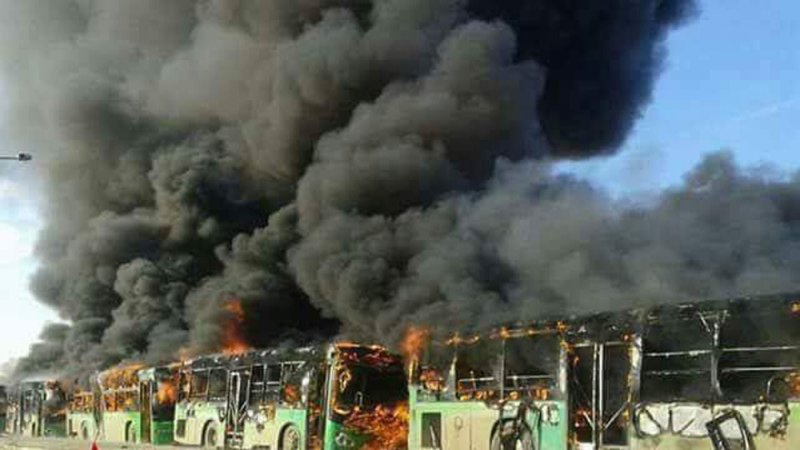 A handout photograph made available on Monday by the official Syrian Arab News Agency it said shows flames and smoke rising from green government buses, used to evacuate people from areas besieged by rebels, after they were set ablaze, in Idlib province, Syria on Sunday. Photo by SANA/European Pressphoto Agency

BEIRUT -- Syrian rebels have surren­dered eastern Aleppo, their last key urban stronghold, after a brutal 6-month siege in which much of the his­toric city was reduced to rubble. Syr­ian President Bashar al-Assad is now expected to unleash a new offensive against opposition forces in northern Syria.

The fall of eastern Aleppo, which rebel groups had held since mid-2012, marked a decisive moment in the nearly 6-year-old Syrian war as Assad's forces reportedly rampaged through the streets summarily ex­ecuting dozens of suspected rebels.

It capped a 15-month blitz spear­headed by Russian air power and Iranian-led ground forces in which Assad seized control of central and western Syria, territory known as "useful Syria" that may define the post-war state.

This has given the regime, which in mid-2015 was facing defeat, an immense boost while delivering the heaviest blow the rebels have suf­fered since 2012, critically under­mining their position at the negotiat­ing table.

It is, however, clear that the multi­sided conflict that has killed an esti­mated 400,000 people and driven 11 million from their homes is far from over.

There are still 150,000 rebels of various stripes in Idlib province, which neighbors Aleppo in northwestern Syria, and thousands more, including the Islamic State, in the east and south.

Analyst Charles Lister of the Mid­dle East Institute in Washington, who has spent years in the region, said the mainstream opposition in the north was about to "transform itself into a guerrilla-type insurgency in 2017."

The rebel factions are riven by eth­nic and ideological rivalries but they can still give Assad a bloody nose.

Witness IS's lightning and op­portunistic seizure of the historic city of Palmyra, 124 miles east of Alep­po, on Dec. 11 while Assad's forces were concentrated on Aleppo. The army reportedly put up little re­sistance in a city it took from IS in March.

Assad controls all of Syria's major cities and their environs — about 40 percent of Syrian territory — and he has grandiosely vowed to regain "every inch" of the country, even though his army has been seriously reduced by combat losses, desertions and mas­sive draft-dodging.

Russia, and to a lesser extent Iran, do not endorse this objective. They have their own strategic imperatives in Syria and are reluctant to step up the increasingly costly military oper­ations there, which would escalate a conflict that could drag in more out­side powers.

With the rebels reeling after Alep­po, what Saudi Arabia, Turkey and Qatar — their biggest backers — do in the next few weeks could be critical.

With the war shifting toward Idlib, the geopolitical consequences could be game-changing, with Iran, in particular, making significant gains.

This means, observed Syria expert Joshua Landis of the University of Oklahoma in the United States, "that a new security architecture is being laid down in the northern Middle East... in which pro-Iranian govern­ments are consolidating their grip...

"This has caused great grief and consternation in Saudi Arabia and among many of the United States' allies"" he told the PBS public televi­sion network.

Voices // 2 months ago
As urban life resumes, U.S. cities have chance to avoid return to gridlock
June 22 (UPI) -- Traffic is so ubiquitous in U.S. cities that until recently, imagining urban life without it meant looking to other nations for examples. Then, in 2020, COVID-19 closures and lockdowns took drivers off the roads.

Voices // 2 months ago
Iran in furtive race to develop a nuclear weapon
June 21 (UPI) -- It seems clear Iran's regime is intent on buying time by keeping negotiations on the nuclear deal at arms length in Vienna, obstructing the IAEA, while at the same time accelerating its sprint to build a nuclear bomb.