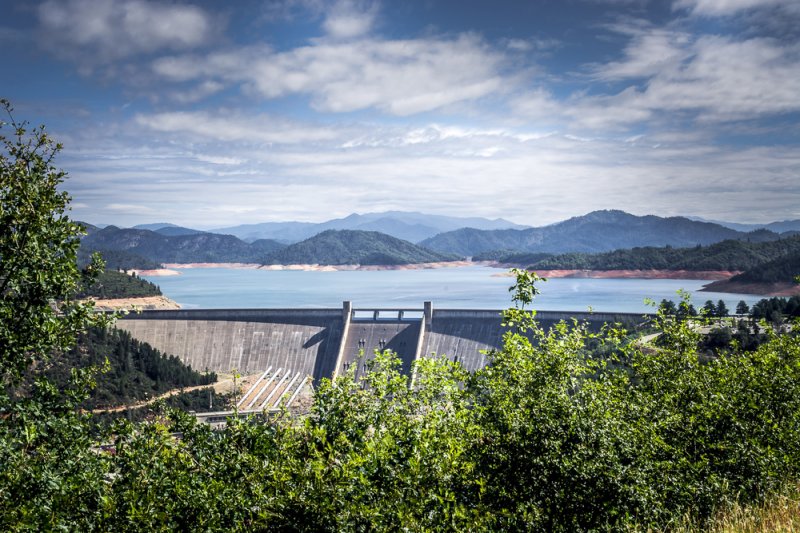 Shasta Dam is a concrete arch-gravity dam across the Sacramento River in Northern California. At 602 feet high, it is the ninth-tallest dam in the United States. Photo by Ronnie Gregory/Shutterstock

California is in the midst of one of the most severe droughts on record, which has brought water to the forefront of our attention. While agriculture receives most of the press when it comes to water usage, California is an energy-producing powerhouse, and that energy production requires access to a reliable water supply.

California ranks third in the nation in both crude oil production and refining capacity. It's fourth in net electricity generation, fourth in conventional hydropower generation, and first in terms of solar and geothermal energy production. These activities help secure an abundant and reliable energy supply, but at the expense of tens of billions of gallons of freshwater consumption per year.

There is an unfortunate irony here: While the energy sector affects climate by releasing heat-trapping gases, climate can also affect the reliability of energy production through changes in the timing and availability of the water supply. Hydropower is the obvious example, but it isn't the only source of energy affected by climate. When water-cooled power plants, representing nearly 90 percent of total U.S. power generation, have too little water, too much water, or too hot water, they have to curtail operation. Water is a growing concern to oil and natural gas producers, too. Heat also exacerbates climate impacts by reducing the efficiency of thermal power generators, combustion engines and even the operation of solar photovoltaic panels.

There are dozens of examples of how drought and hot temperatures have undermined energy production. In 2006, nuclear power plants across Europe were curtailed when rivers became too hot to safely cool reactors. In 2012, the largest blackout in history occurred in India, as the country's hydropower resources faced record low levels due to drought at the same time demand hit record highs.

Closer to home, in 2014, California's Independent System Operator reported that three of the state's thermal power plants were at risk of having water supply curtailments because of the drought. Over the past two decades, hydropower contributed an average of 17 percent of California's total in-state power generation; in 2014 and 2015, hydropower generation represented just under 8 percent. Lost hydropower during the recent drought has been met by increases in natural gas generation, which has resulted in more greenhouse gases to the atmosphere.

Luckily there are some win-wins for climate change mitigation and water conservation strategies. Electricity generated via wind turbines and solar PV panels require virtually no water. Ten years ago these sources contributed only 2 percent of California's total in-state generation. In 2015, they represented nearly 13 percent of the state's generation. Energy efficiency is also a huge win for water conservation, since a unit of saved energy also saves the water embedded in the production, conversion and transportation of that energy resource. Shifts towards water-lean renewables and energy efficiency in recent years have helped to decouple the dependence of the state's power sector on water sources, making us less vulnerable to the drought-induced disruptions that are plaguing power systems around the world.

There are also some potential win-loses for climate and water that we must remain cognizant of. Some emissions-free sources of energy, such as concentrating solar power, geothermal and nuclear power plants, require large amounts of cooling water. Installing carbon capture and sequestration and other advanced pollution control systems to power plants often requires auxiliary systems that can significantly increase the water requirements of power generation. Similarly, some alternative transportation fuels, such as hydrogen and biofuels that require irrigation, can reduce dependence on petroleum, but at the expense of water resources.

Some of our drought measures can also undermine our climate change mitigation efforts. Many of California's power plants have switched to dry cooling, which saves water at the expense of efficiency penalties. A dry-cooled fossil-fueled power plant will generally emit more greenhouse gases than the same plant operating with a wet-cooling system, since water is a more efficient cooling fluid than air moved with fans. "Drought-proof" but energy-intensive, water supply options such as seawater desalination can increase the carbon intensity of producing drinking water. Thus, we must be mindful of the water intensity of our energy supplies, as well as the energy intensity of our water supplies, as we address drought and climate change.

Kelly Twomey Sanders is an assistant professor at the University of Southern California.This article originally appeared on Water Deeply, and you can find the original here. For important news about the California drought, you can sign up to the Water Deeply email list.

Voices // 2 months ago
As urban life resumes, U.S. cities have chance to avoid return to gridlock
June 22 (UPI) -- Traffic is so ubiquitous in U.S. cities that until recently, imagining urban life without it meant looking to other nations for examples. Then, in 2020, COVID-19 closures and lockdowns took drivers off the roads.

Voices // 2 months ago
Iran in furtive race to develop a nuclear weapon
June 21 (UPI) -- It seems clear Iran's regime is intent on buying time by keeping negotiations on the nuclear deal at arms length in Vienna, obstructing the IAEA, while at the same time accelerating its sprint to build a nuclear bomb.