Refugee rights must not be based on religion 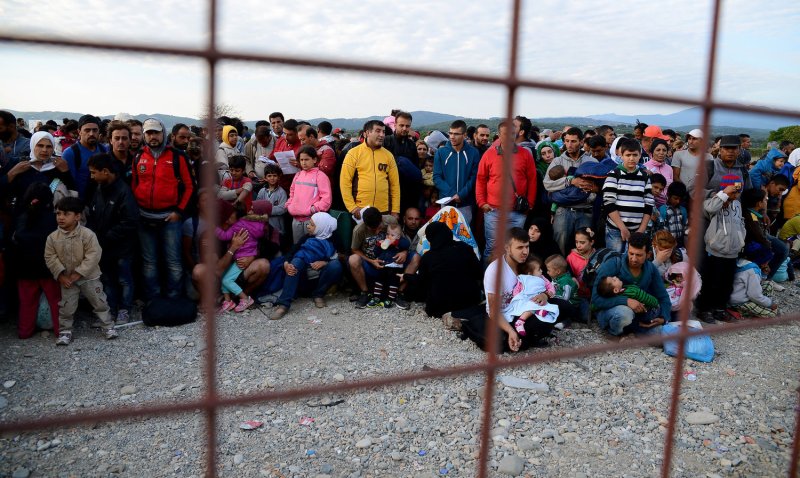 Migrants and refugees are seen on the border near the town of Gevgelija, Macedonia, last September as they await permission to get into the country. File Photo by Borce Popovski/UPI | License Photo

The violence of Daesh (also known as ISIS, ISIL and the Islamic State) toward Yazidis, Christians and Shia Muslims was defined as genocide by the U.S. State Department on March 17. All three groups face an existential threat as a result of Daesh's violent and exclusive ideology. The men are beheaded or forced to convert to Daesh's particular brand of Islam, and the women and children are taken as sex slaves. Because of this overwhelming threat to their existence as ethnic and religious minorities, Yazidis, Christians and Shia Muslims all qualify for refugee status and should be given priority for resettlement in the United States.

However, in the wake of the Paris and Brussels attacks, U.S. politicians like Ted Cruz have proposed a policy that would only allow Christian refugees to gain entry through the resettlement program. The reasoning for this policy is based on the understanding that "there is no meaningful risk of Christians committing acts of terror." Such reasoning is not faulty in and of itself, and national security should continue to be a priority for America's leaders. Unfortunately though, the extent to which their logic is applied reveals a bias in favor of Christians and a not-so-subtle bigotry against anyone else.

President Barack Obama, in his response to such a policy, popularized the phrase "religious test" as a reference to this idea. Indeed, Cruz's proposal does seem to be a religious test for refugee resettlement. If you're a Christian, you're in; if you're not a Christian, you're out. However, the logic behind his policy reveals a different kind of test: if you don't pose a terrorist risk, you're in; if you do pose a terrorist risk, you're out.

So, even if we buy into the fear-mongering rhetoric of Cruz and others (and we shouldn't), we must recognize that they are being logically inconsistent by not also advocating for the priority resettlement of Yazidis and even Shia Muslims. Yazidis have never been known to commit acts of terrorism throughout their history. In fact, as an ethnic and religious minority, they have most often been the victims of terror, just as they are today.

When the discussion turns to Shia Muslims, many will bring up organizations like Hezbollah to illustrate that they would pose a terrorist threat if accepted for resettlement. However, while Hezbollah is recognized as a terrorist organization by the United States and the European Union, no terrorist attack has ever been perpetrated in the West by Shia Muslims. This is because Shia Muslim terrorist groups like Hezbollah have regional political objectives, unlike Daesh's universal apocalyptic ideology. Cruz does not include Yazidis and Shia Muslims in his resettlement policy, even though they, like Christians, pose no "meaningful risk" to national security. This reveals that his position on refugee resettlement is informed more by politicized xenophobic rhetoric than by logically consistent compassion toward victims of genocide.

I agree with Obama that there should be no religious test for America's compassion toward refugees. However, I would go even further and posit that imposing a religious test would represent the opposite of compassion.

A policy that admits refugees to the United States based on a religious test is a form of bigotry, and while it is not the violent and murderous bigotry of Daesh, the underlying principle is the same. One's refugee status and right to escape genocide cannot be determined by a set of religious beliefs or a family tree, but should be decided according to the established guidelines of international law.

Yazidis, Christians and Shia Muslims have all been designated victims of genocide under international and American law. Therefore, the United States has a moral and legal obligation to reject any idea of a religious test and give equal resettlement priority to all victims of genocide.

Tabitha McDuffee is a recent graduate of Moody Bible Institute who authors the FaithandForcedMigration.com blog. This article originally appeared on Refugees Deeply, and you can find the original here. For important news about the global migration crisis, you can sign up to the Refugees Deeply email list.

Voices // 11 months ago
Post-pandemic return to work is perfect opportunity to move to 4-day week
June 18 (UPI) -- As the gradual easing of lockdowns and social restrictions opens the possibility of a welcome return to pre-pandemic habits, there is growing support for the idea of a four-day work week.