On May 23, 1992, President George H.W. Bush instituted a new Haitian refugee policy, permitting the Coast Guard to return the boat people to their homeland.

In 1900, U.S. Army Sgt. William H. Carney became the first African American to be awarded the Medal of Honor. He was cited for his efforts during the Civil War battle of Fort Wagner, S.C., in June 1863.

In 1934, Clyde Barrow and his cigar-smoking sweetheart, Bonnie Parker, who lived by violence, died by violence after being ambushed by police in Bienville Parish, La. 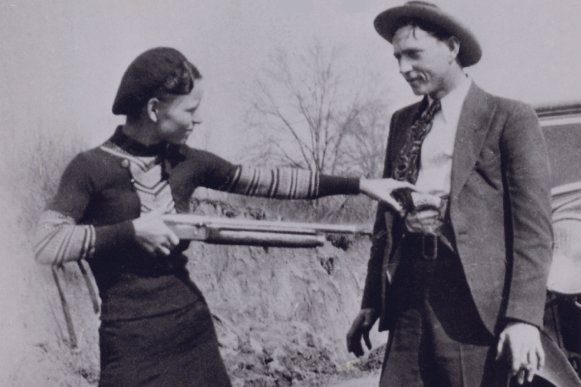 File Photo courtesy of the FBI

In 1939, the U.S. Navy submarine Squalus went down off New Hampshire in 240 feet of water. Twenty-six men died. Thirty-three were saved in a daring rescue with a diving bell. The submarine was raised in September 1939 and recommissioned the USS Sailfish.

In 1945, Heinrich Himmler, the former Gestapo chief, killed himself in a British military prison in Luneburg, Germany.

In 1960, Israeli agents captured Nazi war criminal Adolf Eichmann in Argentina and spirited him to Israel. He was tried, convicted and hanged.

In 2009, police said South Korean President Roh Moo-hyun, 62, linked to a corruption investigation, died in a leap from a cliff near his home after leaving a suicide note.

In 2018, the National Football League approved a new policy requiring all players to stand for the national anthem or remain in the locker room. Under the new rule, the league planned to fine teams if players kneel during the anthem.

In 2021, Belarus' Lukashenko regime forced a flight en route from Greece to Lithuania to land within its borders in order to arrest opposition journalist Roman Protasevich, who was on board.

U.S. News // 2 hours ago
Detroit police officer, gunman killed in shooting
July 7 (UPI) -- A Detroit police officer and a suspect were killed in a gunfight that erupted in the city's west side as law enforcement were responding to reports of a gunman indiscriminately firing an assault rifle, authorities said.

U.S. News // 17 hours ago
Illinois shooting: Robert Crimo III confesses, judge denies bond
July 6 (UPI) -- The man accused of killing seven at a Fourth of July parade near Chicago made his first court appearance on Wednesday from jail. A judge ordered him held without bond.

Italy declares state of emergency due to worst drought in decades