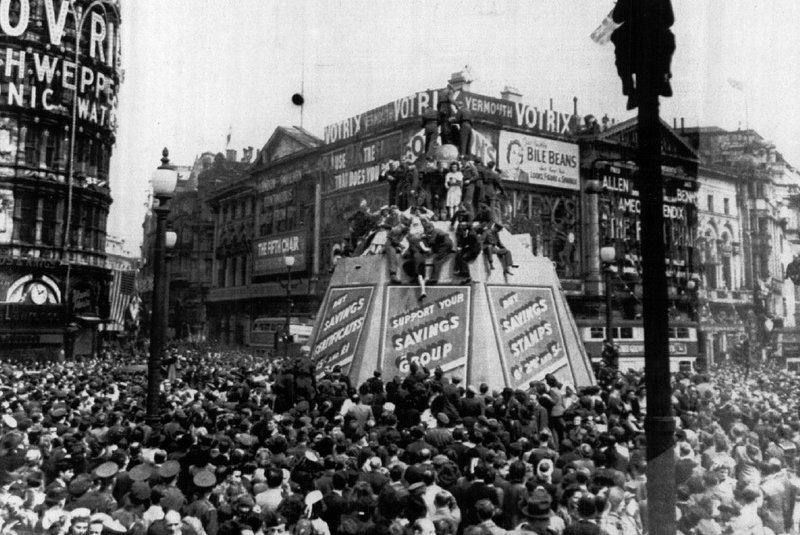 People jam Piccadilly Circus during celebration of V-E Day on May 8, 1945, in London. UPI File Photo

In 1909, President William Howard Taft announced he would continue the conservation policies put in place by his predecessor, President Theodore Roosevelt.

In 1915, reports issued by The Admiralty (Royal Navy) indicated that 703 of the passengers and crew of RMS Lusitania had been rescued, with more than 1,300 believed lost in the previous day's U-boat attack.

In 1970, Let It Be, The Beatles' final original album, was released. In 2015, Spotify said the song "Let It Be" was the No. 2 most-played Beatles song on the streaming service.

In 1984, the Soviet Union declared it wouldn't take part in the Los Angeles Olympics, citing fears about security for its athletes. The decision came four years after the United States team boycotted the Games in Moscow.

In 1996, South Africa voted for a new Constitution. Its bill of rights included the right to food, housing and education.

In 2003, dozens of people were reported killed after the rear door of a cargo jet suddenly opened at 33,000 feet over the Democratic Republic of the Congo and passengers were sucked out of the plane. Many occupants managed to stay in the aircraft until it landed at an airport.

In 2006, Lillian Asplund, the last known U.S. survivor of the 1912 sinking of the Titanic, died of natural causes at her Shrewsbury, Mass., home. She was 99.

In 2011, a senior al-Qaida suspect being moved from his Baghdad cell for questioning grabbed a jailer's gun and set off a 6-hour battle that left at least 14 people dead, including the inmate.

In 2016, Londoners elected Sadiq Khan as the first Muslim mayor in the capital city's history.

In 2018, a 78-foot wave was observed off the coast of Campbell Island, New Zealand, the largest wave ever recorded in the Southern Hemisphere.

In 2019, Iranian President Hassan Rouhani declared the country would partially stop complying with the nuclear deal it signed in 2015 with six other nations.

In 2020, 11-year-old Brazilian skateboarder Gui Khury became the first person to successfully land a 1,080-degree turn on a vertical ramp. He earned a Guinness World Record for his achievement.

U.S. News // 2 hours ago
Trump, Cruz and Abbott speak against gun control at NRA conference
May 27 (UPI) -- Former President Donald Trump and Sen. Ted Cruz spoke against gun control measures at a conference for the National Rifle Association held in Texas on Friday in the aftermath of the Uvalde elementary school shooting.

U.S. News // 5 hours ago
Texas Gov. Abbott says he was 'misled' on police response to Uvalde shooting
May 27 (UPI) -- Texas Gov. Greg Abbott on Friday said he was "misled" about the police response to the Uvalde elementary school shooting days after praising the response of law enforcement.

U.S. News // 7 hours ago
Jury enters deliberations in Johnny Depp, Amber Heard case
May 27 (UPI) -- A Fairfax County, Va., jury began deliberations Friday in the defamation trial between actors Johnny Depp and Amber Heard after about six weeks of testimony and accusations of abuse from both.

U.S. News // 8 hours ago
U.S. stocks break losing streaks for best week since 2020
May 27 (UPI) -- The three major stock indexes in the United States made gains this week, rebounding some from weeks of losses for the best week since November 2020.

U.S. News // 8 hours ago
JFK's 'eternal flame' persists even amid inclement weather
On a November day in 1963, Jacqueline Kennedy stood before the coffin of her late husband, lighting a torch at the head of the grave with the intention of the flame being an eternal symbol of John F. Kennedy's spirit.

U.S. News // 18 hours ago
Texas official: Waiting to engage school shooter was 'wrong decision'
May 27 (UPI) -- Texas' top law enforcement officer said Friday that police made the "wrong decision" not to immediately breach the classroom where a gunman had barricaded himself and killed 21 people.
Advertisement