On Jan. 13, 2012, the cruise ship Costa Concordia slammed into a rocky shoal near the Italian coast and capsized, killing 32 people. 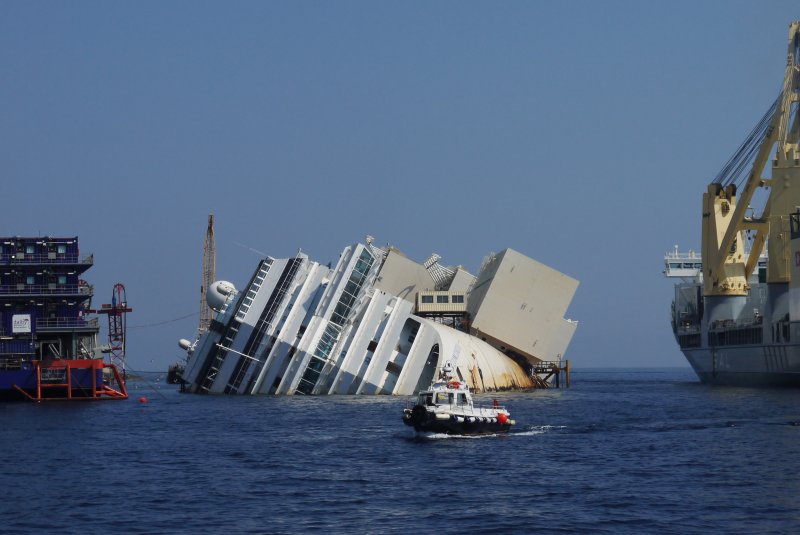 On January 13, 2012, the cruise ship Costa Concordia slammed into a rocky shoal near the Italian coast and capsized, killing 32 people. File Photo courtesy of Wikimedia

In 1985, a passenger train traveling through Ethiopia hurled off the tracks, plunging four cars into a ravine. More than 400 people died and 500 sustained injuries.

In 1997, U.S. President Bill Clinton awarded the Medal of Honor to seven African-American soldiers for their courage in action in Italy during World War II. It was the first time the medal was given to Black WWII servicemen.

In 1999, Michael Jordan, regarded by many as the greatest basketball player ever, announced his second retirement. He led the Chicago Bulls to six NBA championships.

In 2016, three winning tickets split the largest lottery jackpot in the world -- $1.59 billion. The winning Powerball tickets were sold in California, Florida and Tennessee.

In 2018, an alert sent to cellphones in Hawaii falsely warned of a ballistic missile threat. Gov. David Ige said the mistake was caused by someone pushing "the wrong button."

In 2021, the House of Representatives voted to impeach President Donald Trump on charges he incited an insurrection at the U.S. Capitol. He was the first president to be impeached twice. The Senate acquitted him both times.

A thought for the day: former Vice President Hubert Humphrey said in 1964, "Freedom is the most contagious virus known to man."

U.S. News // 7 hours ago
Texas official: Waiting to engage school shooter was 'wrong decision'
May 27 (UPI) -- Texas' top law enforcement officer said Friday that police made the "wrong decision" not to immediately breach the classroom where a gunman had barricaded himself and killed 21 people.

World News // 2 hours ago
Israel moves forward with Sunday's flag march despite concerns over violence
May 27 (UPI) -- A controversial flag march in Jerusalem on Sunday will go through the Damascus Gate and the Muslim Quarters, sparking concerns of violence as the event leads to the Western Wall.

U.S. News // 5 hours ago
Russia trying to wipe out Ukraine culture, identity, Biden tells Naval Academy grads
May 27 (UPI) -- President Joe Biden on Tuesday warned that Russia President Vladimir Putin is not only trying to take over Ukraine, but also wipe out the culture and identity of the Ukrainian people.

U.S. News // 3 hours ago
Manson follower Patricia Krenwinkel cleared for parole
May 27 (UPI) -- Patricia Krenwinkel, a former follower of late convicted murderer Charles Manson, is up for release from a California prison after the state's parole board recommended on Thursday that she should go free.