On Oct. 16, 1991, police said George Hennard shot and killed 23 people and then took his own life after driving his pickup truck through the front window of Luby's Cafeteria in Killeen, Texas. At the time, it was the deadliest mass shooting by a single gunman in U.S. history. 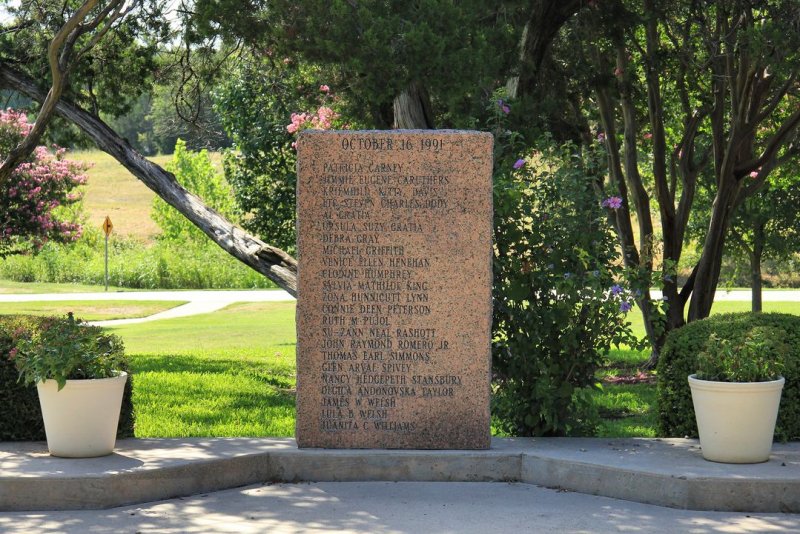 A memorial honoring the victims of the Luby's massacre October 16, 1991, stands in Killeen, Texas. File Photo by Larry D. Moore/Wikimedia

In 1793, following her conviction for treason, French Queen Marie Antoinette, wife of Louis XVI, was beheaded on the Place de la Revolution.

In 1916, the nation's first birth-control clinic was opened in New York by Margaret Sanger and two other women. Officials shut down the clinic 10 days later.

In 1934, about 100,000 men and women belonging to the communist Red Party in China began what would later be called The Long March. The followers of Mao Zedong marched some 6,000 miles fleeing the Nationalist forces.

In 1946, at Nuremberg, Germany, 10 high-ranking Nazi officials were executed by hanging for World War II war crimes. Hermann Goering, founder of the Gestapo and chief of the German air force, was to have been among them but killed himself in his cell the night before.

In 1962, President John F. Kennedy was informed that reconnaissance photographs, collected by a U-2 spy plane two days earlier, had revealed the presence of missile bases in Cuba. This would mark the start of the most fraught 13 days of the 20th century, the beginning of the Cuban Missile Crisis.

In 1968, American track and field athletes Tommie Smith and John Carlos raised their fists in the Black Power salute during the medal ceremony for the 200-meter dash at the Mexico City Olympics. Smith said the gesture was meant to show that "we are black and we are proud of it."

In 1972, a light plane carrying U.S. House Democratic leader Hale Boggs of Louisiana, fellow Democratic Rep. Nick Begich of Alaska and his aide Russell Brown and pilot Don Jonz was reported missing on a flight from Anchorage to Juneau in Alaska. The plane was never found.

In 1987, 18-month-old Jessica McClure was rescued from an abandoned well in Texas, 58 hours after she first fell into it. Her ordeal captured national attention and she came to be known affectionately as "Baby Jessica."

In 1991, police said George Hennard shot and killed 23 people and then took his own life after driving his pickup truck through the front window of Luby's Cafeteria in Killeen, Texas. At the time, it was the deadliest mass shooting by a single gunman in U.S. history.

In 2013, all 44 people aboard a Lao Airlines plane died after the ATR twin-turbo crashed just before landing at its destination in Pakse, Laos.

In 2020, French teacher Samuel Paty was beheaded in an attack after showing his classroom cartoons of the Prophet Muhammad. Police shot and killed the 18-year-old Islamist attacker.

World News // 8 hours ago
Scotland to deny trans prisoners with violent history toward women transfers to women's prison
Jan. 29 (UPI) -- The Scottish Prison System will not transfer any transgender prisoner with a history of violence toward women to a women's prison after a review over procedures last week.

World News // 10 hours ago
With tanks incoming, Ukraine shifts focus to aircraft
Jan. 29 (UPI) -- Ukraine is seeking a fleet of fighter jets to repel Russia and retake ground days after the United States and Germany agreed to send advanced tanks to the battlefield.

U.S. News // 12 hours ago
6 killed, more injured in New York bus crash
Jan. 29 (UPI) -- Six people are dead and another three are injured after a box truck and a bus collided head-on in New York.
Advertisement