On This Day: Earthquake in Aleutian Islands triggers deadly tsunami in Hawaii

On April 1, 1946, an earthquake near Alaska's Aleutian Islands created a tsunami that raced south across the Pacific Ocean, slamming into the Hawaiian Islands.

People run away from an approaching tsunami in Hilo, Hawaii, on April 1, 1946. The tsunami was sparked by an earthquake in the Aleutian Islands about 4 hours earlier. File Photo courtesy of the Pacific Tsunami Museum/Wikimedia

U.S. Marine reinforcements wade ashore to support the beachhead on Okinawa, Japan, on April 1, 1945. File Photo courtesy of the U.S. Department of Defense

On April 1, 2003, U.S. Marines rescued Pfc. Jessica Lynch, 19, who had been held prisoner in Iraq since an ambush on March 23. File Photo courtesy of the U.S. Air Force | License Photo

Tennis pro sisters Serena Williams (L) and Venus Williams hold up replicas of Wrigley's Doublemint Chewing Gum prior to their March 22, 2001, announcement in Miami that they have signed a deal to promote the product. On April 1, 1891, the Wrigley Company is founded in Chicago, Ill., by William Wrigley, Jr., originally selling goods such as soap and baking powder. A year later Wrigley would start packaging packets of gum with each tin of baking powder. The rest is history. File Photo by Ron C. Angle/UPI | License Photo

Burmese pro-democracy leader Aung San Suu Kyi receives her honorary degree along with seven other distinguished figures at the Encaenia ceremony held at the Sheldonian Theatre in Oxford on June 20, 2012. On April 1, 2012, Aung San Suu Kyi won a seat in Parliament less than two years after being freed from nearly two decades of house arrest. File Photo by Paul Treadway/UPI | License Photo

In 1826, Samuel Morey was granted a patent on the internal combustion engine.

In 1891, the Wrigley Company is founded in Chicago, Ill., by William Wrigley, Jr., originally selling goods such as soap and baking powder. A year later Wrigley would start packaging packets of gum with each tin of baking powder. The rest is history.

In 1918, toward the end of World War I, the British founded the Royal Air Force. Two months later it began bombing industrial targets in Germany from bases in France. 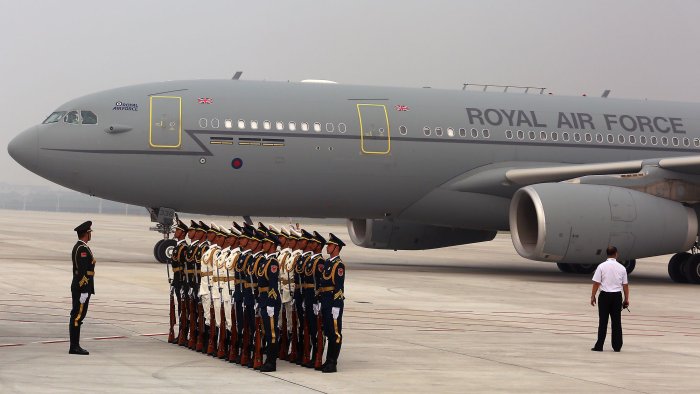 In 1924, Adolf Hitler was sent to prison for five years after failing to take over Germany by force in the unsuccessful "Beer Hall Putsch."

In 1945, U.S. forces swarmed ashore on the Japanese island of Okinawa to begin what would be one of the longest battles of World War II.

In 1946, a massive earthquake near Alaska's Aleutian Islands created a tsunami that raced south across the Pacific Ocean, slamming into the Hawaiian Islands causing widespread destruction. The two events resulted in more than 165 casualties across three states.

In 1976, Apple Inc. was founded by Steve Jobs and Steve Wozniak.

In 1979, the overthrow of the shah becomes official as Iran votes to become an Islamic republic.

In 1984, Marvin Gaye, whose rhythm and blues hits over nearly 25 years included "I Heard it Through the Grapevine" and "Sexual Healing," was shot and killed by his preacher father.

In 1996, an outbreak of "mad cow" disease forced Britain to plan the mass slaughter of cows.

In 1999, Canada created a new territory, Nunavut, as a means of providing autonomy for the Inuit people.

In 2012, Aung San Suu Kyi, Nobel peace laureate and voice of the political opposition in Myanmar, won a seat in Parliament less than two years after being freed from nearly two decades of house arrest.

In 2019, Japan announced the name of its new imperial era would be "Reiwa," when Crown Prince Naruhito becomes emperor, which would happen one month later.

In 2020, the All England Club canceled the Wimbledon tournament because of the COVID-19 pandemic.