On Feb. 28, 1942, Japanese forces landed in Java, the last Allied bastion in the Dutch East Indies. 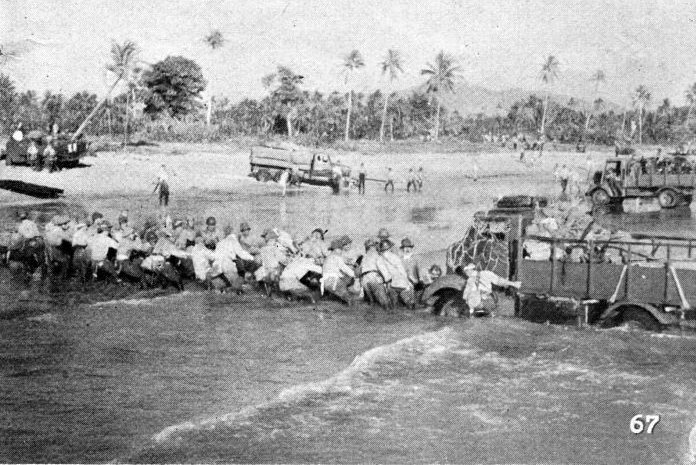 On February 28, 1942, Japanese forces landed in Java, the last Allied bastion in the Dutch East Indies. File Photo courtesy of the Tropenmuseum/Wikimedia Commons

Special counsel and former U.S. Sen. John C. Danforth points to where shell casings were found at the Branch Davidian compound, in Waco, Texas, during a news conference July 21, 2000. On February 28, 1993, federal agents attempting to serve warrants on the Branch Davidian compound near Waco, Texas, were met with gunfire that left five dead. File Photo by Bill Greenblatt/UPI | License Photo

In 1784, the Methodist Church was chartered by John Wesley.

In 1844, an explosion rocked the "war steamer" USS Princeton after it test-fired one of its guns. The blast killed or injured a number of top U.S. government officials who were aboard.

In 1885, the American Telephone and Telegraph Co. was incorporated in New York as a subsidiary of American Bell Telephone.

In 1935, nylon was invented by DuPont researcher Wallace Carothers.

In 1942, Japanese forces landed in Java, the last Allied bastion in the Dutch East Indies.

In 1983, the concluding episode of the long-running television series M*A*S*H drew what was then the largest TV audience in U.S. history.

In 1986, Swedish Prime Minister Olof Palme was assassinated on a street in Stockholm.

In 1992, a bomb blast blamed on the IRA ripped through a London railway station, injuring at least 30 people and shutting down the British capital's rail and subway system.

In 1993, federal agents attempting to serve warrants on the Branch Davidian religious cult's compound near Waco, Texas, were met with gunfire that left at least five people dead and 15 injured, and marked the start of a month-and-a-half-long standoff.

In 1994, NATO was involved in combat for the first time in its 45-year history when four U.S. fighter planes operating under NATO auspices shot down four Serb planes that had violated the U.N. no-fly zone in central Bosnia. The action came to be known as the Banja Luka incident.

In 2008, Prince Harry, third in line for the British throne, was pulled from the front lines in Afghanistan immediately after word got out that he was on army duty. He had spent 10 weeks in the war zone.

In 2020, an arbitration court handed an eight-year ban to three-time Chinese Olympic swimming champion Sun Yang, one of China's best hopes for hold in the Tokyo Olympics, for potential doping.

A thought for the day: "In general my children refuse to eat anything that hasn't danced on television." -- American humorist Erma Bombeck

U.S. News // 1 hour ago
Nevada Assembly repeals death penalty, sends to Senate
April 13 (UPI) -- Nevada's Assembly voted Thursday to abolish the death penalty, a bill that, if signed into law, would make the state the 24th to outlaw the punishment.

U.S. News // 13 hours ago
Biden honors slain Capitol officer: 'When will defies fear, that is heroism'
April 13 (UPI) -- U.S. Capitol Police officer William "Billy" Evans, who was killed during an attempted building breach this month, lay in honor Tuesday in the Capitol Rotunda.