On Dec. 2, 1970, the Environmental Protection Agency was formed with Indianapolis lawyer William Ruckelshaus as its administrator.

On December 2, 1993, Colombian drug trafficker Pablo Escobar was killed in a shootout with police and soldiers in the Colombian city of Medellin. File Photo courtesy of Colombian National Police

On December 2, 1927, the Model A Ford was introduced as the successor to the Model T. The price of a Model A roadster was $395. File Photo by Richard Smith/Flickr

In 1954, the U.S. Senate voted 65-22 to condemn Sen. Joseph R. McCarthy, R-Wis., for conduct unbecoming a senator. The condemnation, which was equivalent to a censure, related to McCarthy's controversial investigation of alleged communists in the U.S. government, military and civilian society.

In 1970, the Environmental Protection Agency was formed with Indianapolis lawyer William Ruckelshaus as its administrator.

In 2001, energy company Enron filed for bankruptcy, sparking one of the biggest corporate scandals in U.S. history. The Houston-based company was found to have fraudulent accounting practices.

In 2016, a fire broke out an Oakland, Calif., warehouse killing 36 people. The warehouse, which was being used for artist studios and dwellings, was hosting a concert at the time of the fire.

In 2018, Israeli police recommended Prime Minister Benjamin Netanyahu and his wife, Sara Netanyahu, face charges for bribery, fraud and breach of public trust as part of the so-called Case 4000.

A thought for the day: "Don't tell people how to do things. Tell them what to do and let them surprise you with their results." -- U.S. Gen. George S. Patton

World News // 17 minutes ago
Dual suicide bombing attacks kill more than 30 in Baghdad
Jan. 21 (UPI) -- Two suicide bombings targeted a marketplace in central Baghdad on Thursday, the first of its kind there in nearly two years.

U.S. News // 54 minutes ago
Dr. Fauci says U.S. staying with WHO, focused in global COVID-19 fight
Jan. 21 (UPI) -- Dr. Anthony Fauci signaled to the World Health Organization on Thursday that the United States isn't going anywhere, and the Biden administration is committed to helping lead the global fight against the pandemic. 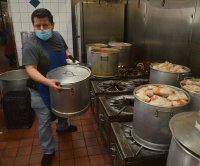