On This Day: Pacific Southwest crash kills 144 in San Diego

The Constitution and Bill of Rights are on display in the rotunda of the National Archives Museum in Washington, D.C., on April 15, 2019. The Bill of Rights was adopted September 25, 1789. File Photo by Pat Benic/UPI | License Photo

In 1513, Spanish explorer Vasco Balboa crossed the Isthmus of Panama and became the first known European to see the Pacific Ocean.

In 1690, the first American newspaper, called Publick Occurrences, Both Foreign and Domestic, appeared in Boston.

In 1789, the first U.S. Congress adopted 12 amendments to the Constitution. Ten were ratified and became known as The Bill of Rights.

In 1882, the first Major League Baseball doubleheader was played between the Providence, R.I., and Worchester, Mass., teams. 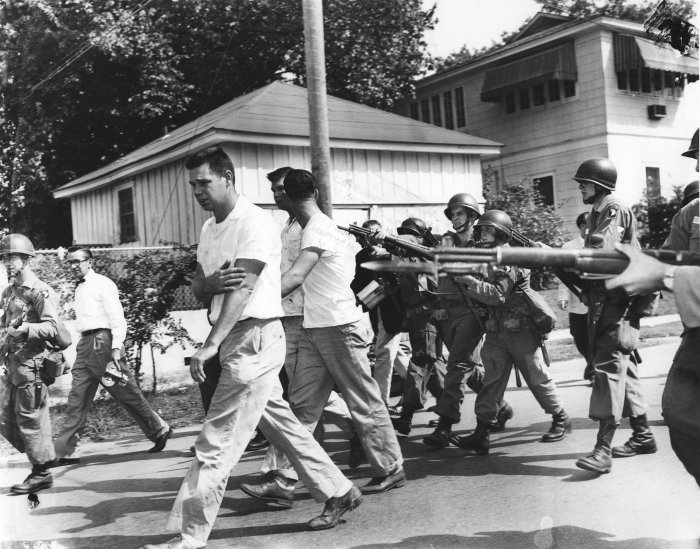 In 1978, Pacific Southwest Airlines Flight 182 crashed in San Diego after colliding with a small Cessna aircraft. The crash killed 144 people, including seven on the ground.

In 1981, Sandra Day O'Connor was sworn in as the first female U.S. Supreme Court justice.

In 1984, Jordan announced it would restore relations with Egypt, something no Arab country had done since 17 Arab nations broke relations with Cairo over the Egyptian-Israeli peace treaty of 1979.

In 1988, Pope John Paul II beatified six people, including the Rev. Junipero Serra, bringing a step away from sainthood the Spanish-born Franciscan priest who founded missions and baptized thousands of Native Americans into the Roman Catholic faith in California in the 1700s.

In 1992, a judge in Orlando, Fla., granted a 12-year-old boy's precedent-setting petition to "divorce" his mother.

In 1996, Israeli police opened fire on Palestinians rioting over a new tunnel entrance beneath the Temple Mount. The fighting ended four days later, with about 70 people killed and hundreds injured.

In 2008, federal regulators seized Washington Mutual in what officials said was the biggest bank failure in U.S. history.

In 2010, a federal judge gave California the go-ahead to resume executions after an almost five-year ban while procedures were reformed and a new death chamber was built.

In 2011, Saudi Arabian King Abdullah granted women the right to vote and run for local office in future elections, starting in 2015, but turned down a bid for them to be allowed to drive.

In 2018, a Pennsylvania judge sentenced actor Bill Cosby to three years to 10 years in state prison for drugging and sexually assaulting Andrea Constand more than a decade before.

U.S. News // 1 hour ago
James Randi, magician and debunker, dies at 92
Oct. 21 (UPI) -- James Randi, the magician, escape artist and debunker of paranormal and pseudoscientific claims, has died. He was 92.