On This Day: Thousands protest racial violence in Silent Parade

In 1868, the ratified 14th Amendment was adopted into the U.S. Constitution, guaranteeing citizenship and all its privileges to African Americans.

In 1917, thousands of Black Americans marched down New York City's Fifth Avenue as part of the so-called Silent Parade to protest racial violence.

In 1945, the United States approved the charter establishing the United Nations.

In 1945, a military B-25 bomber crashed into the Empire State Building in New York City, killing 14 people and setting the building ablaze.

In 1976, a 7.8-magnitude earthquake struck the Tangshan, China, area, killing more than 240,000 people. It was among the deadliest quakes in recorded history.

In 1984, U.S. President Ronald Reagan opened the Summer Olympic Games in Los Angeles. A Soviet-led bloc of 15 nations, as well as Iran, Libya, Albania and Bolivia, boycotted the Games.

Olympic Torch Tower of the Los Angeles Coliseum on the day of the opening ceremonies of the XXIII Summer Olympics on July 28, 1984. UPI File Photo

In 2010, a plane flying in intense fog and rain to Islamabad crashed in the Himalayan foothills near its destination, killing all 152 people aboard.

In 2016, Hillary Clinton became the first woman to accept a presidential nomination from a major U.S. political party. She edged out fellow Democratic contender Bernie Sanders, but lost the general election to Republican Donald Trump.

In 2019, 16-year-old Kyle "Bugha" Giersdorf became the first Fortnite World Cup champion. His $3 million cash prize was the largest payout ever for a single player in an esports tournament. 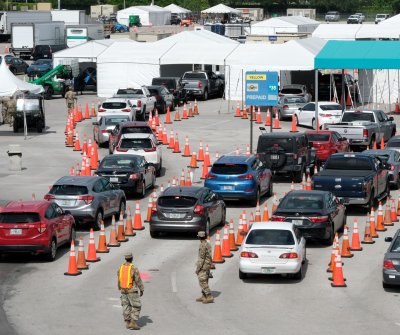