In 1765, the Stamp Act was passed by Britain's Parliament, introducing a tax on printed materials in the American colonies. Colonists believed this to be a violation of their rights and was a major grievance listed in the Declaration of Independence.

In 1941, the Grand Coulee Dam on the Columbia River began producing electrical power for the Pacific Northwest.

In 1945, representatives from Egypt, Syria, Lebanon, Transjordan, Saudi Arabia, Iraq and Yemen met in Cairo to establish the Arab League.

In 1968, U.S. President Lyndon Johnson recalled Army Gen. William Westmoreland as commander of U.S. troops in Vietnam and made him Army chief of staff. Gen. Creighton Abrams took over in Saigon.

In 1989, Pete Rozelle resigned as commissioner of the National Football League after holding the job 30 years.

In 1992, a USAir plane skidded off a runway at New York's LaGuardia Airport during a snowstorm and landed in Flushing Bay. Twenty-seven people died.

In 2003, a U.S. Army maintenance convoy in Iraq made a wrong turn and was ambushed. Eleven soldiers were killed and seven, including Pfc. Jessica Lynch, were captured. Lynch later said she was erroneously praised for heroism: "I'm not a hero. I'm just a survivor."

In 2004, the founder and spiritual leader of the Palestinian terrorist organization Hamas, Ahmed Yassin, was killed in an Israeli missile strike in the Gaza Strip.

In 2011, an Israeli court sentenced former President Moshe Katsav to seven years in prison for rape and sexual harassment.

In 2012, a group of military officers seized control of the Mali government and ousted President Amadou Toumani Toure, even though he had planned to step down the following month.

In 2014, a mudslide in Oso, Wash., left 43 people dead after a portion of a hill collapsed in the wake of weeks of rain.

In 2016, three coordinated bombings in Belgium -- two at Brussels Airport and one at Maalbeek metro station -- left 35 people, including three attackers. The Islamic State claimed responsibility.

In 2017, an attacker drove a vehicle into pedestrians on Westminster Bridge in London before abandoning the car, fatally stabbing an unarmed police officer and being shot and killed by another officer. Six people, including the attacker, died.

In 2018, President Donald Trump ordered tariffs on about $60 billion of imported Chinese goods.

A thought for the day: "The eternal quest of the individual human being is to shatter his loneliness." -- American journalist Norman Cousins 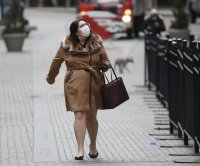 U.S. News // 8 hours ago
National Guard to send 15,000 troops back home after Capitol duty
Jan. 23 (UPI) -- National Guard troops that had been stationed in Washington, D.C., since the Capitol riot are heading back home this week following orders from several governors for their return.