On This Day: Michael Jordan announces return to basketball

On March 18, 1995, "I'm back." Superstar Michael Jordan announced he was returning to professional basketball and the Chicago Bulls after a 17-month break, during which he had tried a baseball career. 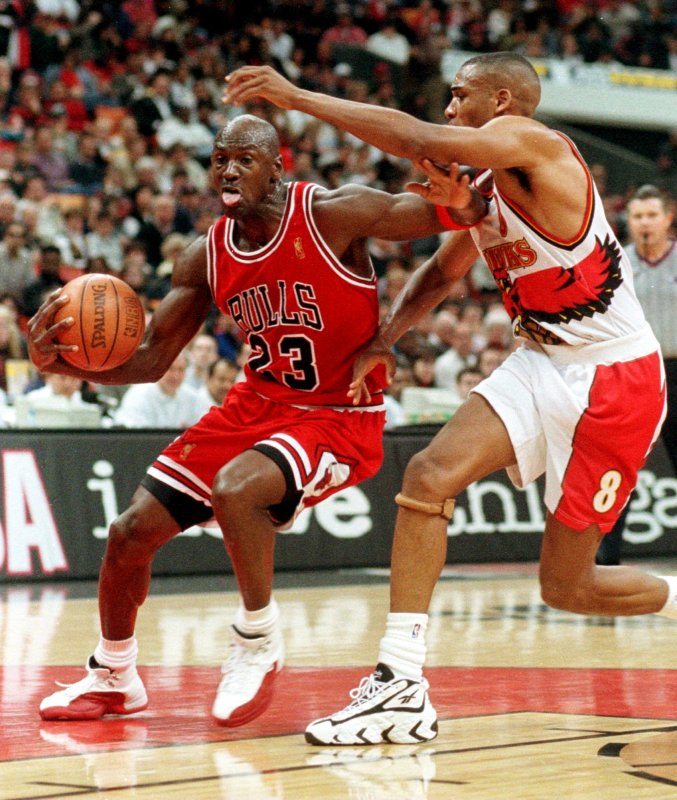 Chicago Bulls Michael Jordan drives past Atlanta Hawks Steve Smith for a layup during the second period February 14, 1997, in Atlanta. The Bulls ended Atlanta's winning streak at 20 games with a 89-88 victory. On March 18, 1995, "I'm back." Superstar Michael Jordan announced he was returning to professional basketball and the Chicago Bulls after a 17-month break. File Photo by Jim Middleton/UPI | License Photo

On March 18, 1922, Mahatma Gandhi was sentenced to six years in prison for civil disobedience against the British rulers of India. File Photo by Bert Brandt/Acme Newspictures/UPI

Cosmonaut Alexey A. Leonov, the first man to walk in space, gives a thumbs-up to the crowd at the 30th anniversary reunion program of the Apollo-Soyuz mission at the National Air and Space Museum in Washington, D.C., on July 14, 2005. On March 18, 1965, Leonov became the first person to walk in space. File Photo by Kevin Dietsch/UPI | License Photo

In 2002, a 13-year-old girl died two days after being struck in the head by a puck at a Columbus Blue Jackets-Calgary Flames game. The incident forced the National Hockey League to have teams install 18-foot nets behind all goals to protect spectators.

In 2014, the U.S. State Department ordered Syria to close its embassy in Washington, D.C., and consulates in Michigan and Texas, and expelled all diplomats without U.S. citizenship or lawful permanent residency status.

In 2018, an Uber vehicle on autonomous mode struck and killed a pedestrian in Tempe, Ariz., the first fatal crash involving a self-driving car.

In 2019, a gunman opened fire on a tram in Utrecht, the Netherlands, killing three people and injuring several others.

U.S. News // 42 minutes ago
Supreme Court restricts use of warrantless searches in homes
May 17 (UPI) -- The U.S. Supreme Court on Monday ruled that a doctrine allowing police to carry out searches without a warrant in some cases does not apply to entering private homes.

Defense News // 2 hours ago
U.S. Navy, NATO begin missile exercises off Scottish coast
May 17 (UPI) -- Navy vessels of 10 nations, including the United States, are massed off the Scottish coast for a NATO interoperability exercise to include live missile fire, the U.S. Navy said on Monday.