On This Day: U.S. Marines raise flag on Iwo Jima

On Feb. 23, 1945, members of the 5th Division of the U.S. Marines planted a U.S. flag atop Mount Suribachi on the strategically important Pacific island of Iwo Jima near the end of one of World War II's bloodiest battles. 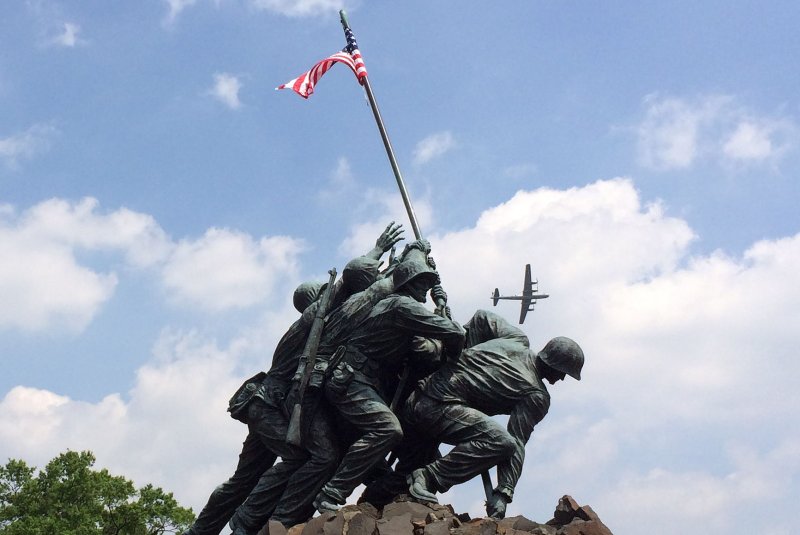 A World War II-era B-29 Superfortress flies over the Iwo Jima Memorial in Washington, D.C., on May 8, 2015. On February 23, 1945, members of the 5th Division of the U.S. Marines planted a U.S. flag atop Mount Suribachi on the Pacific island of Iwo Jima. File Photo by Ioana Dietsch/UPI | License Photo

Col. Antonio Tejero Molina attempts a coup d'état before Spanish Parliament during a vote for a new premier on February 23, 1981. File Photo by Hugo Peralta/UPI

On February 23, 1903, the United States was granted a lease "in perpetuity" on Guantanamo Bay by Cuban officials. File Photo by Ezra Kaplan for UPI

In 1836, soldiers under the command of Mexican President General Antonio López de Santa Anna began their assault on the Alamo Mission near present-day San Antonio, Texas. Eleven days later, the Alamo's small group of Texian (Texan) defenders were defeated by the 1500-plus Mexican Army.

In 1903, the United States was granted a lease "in perpetuity" on Guantanamo Bay by Cuban officials.

In 1942, a Japanese submarine surfaced off the coast of California and fired 25 shells at an oil refinery near Santa Barbara.

In 1945, members of the 5th Division of the U.S. Marines planted a U.S. flag atop Mount Suribachi on the strategically important Pacific island of Iwo Jima near the end of one of World War II's bloodiest battles.

In 1954, Dr. Jonas Salk's new polio vaccine was first administered to a group of children in Pittsburgh. Millions of children would get the vaccine in the next year.

In 1981, right-wing troops seeking to topple Spain's democracy seized Parliament and its 350 deputies in a blaze of gunfire. The attempted military revolt was quelled when King Juan Carlos called for for calm and loyalty.

In 1982, Canada, Japan and the Common Market nations of Europe joined the United States in economic and diplomatic sanctions against Poland and the Soviet Union to protest imposition of martial law in Poland.

In 1991, military forces in Thailand overthrew the elected government and imposed martial law.

In 1994, Bosnia's warring Croats and Muslims signed a cease-fire. The Croats agreed to pull back from the Muslim city of Mostar, which had been under siege.

In 1999, a jury in Jasper, Texas, convicted self-described white supremacist John King in the June 1998 killing of a black man who'd been dragged to his death behind a pickup truck. Two days later, King was sentenced to death.

In 2006, the snow-covered roof of a Moscow vegetable market collapsed, killing at least 60 people and injuring more than two dozen others.

In 2013, Iran's atomic energy agency announced plans to build 16 nuclear power plants throughout the country. The announcement came days before Iran was to resume talks on its internationally disputed nuclear program.

In 2019, Nigerians went to the polls to elect the president. Days later, President Muhammadu Buhari was declared the winner.

U.S. News // 10 minutes ago
RFK granddaughter, great-grandson missing while canoeing
April 3 (UPI) -- The U.S. Coast Guard was searching for the daughter and grandson of former Maryland Lt. Gov. Kathleen Kennedy Townsend on Friday, one day after the two went missing in the Chesapeake Bay.

U.S. News // 3 hours ago
Gallup: U.S. residents hesitant to return to regular activities
April 3 (UPI) -- Concern about the coronavirus is weighing heavy on U.S. residents with only 14 percent saying they would resume their daily activities if it was up to them, according to a new Gallup poll released this week.

U.S. News // 4 hours ago
Trump nominates controversial Kentucky judge for D.C. court
April 3 (UPI) -- President Donald Trump on Friday nominated Justin Walker, a Kentucky judge who was a controversial pick for the federal bench when he was appointed on a party-line vote five months ago, for a seat in Washington, D.C.