President Bill Clinton makes a point as he participates June 2, 1998, in a roundtable discussion in Houston on the importance of the upcoming Census 2000. On January 17, 1998, U.S. President Bill Clinton denied in a sworn deposition that he had an affair with former White House intern Monica Lewinsky. File Photo by George Wong/UPI | License Photo

Lance Armstrong delivers remarks at a press conference held to urge Congress to oppose cuts to cancer research and prevention programs in Washington on March 24, 2011. On January 17, 2013, Armstrong, in an interview broadcast on OWN (the Oprah Winfrey Network), said he used banned substances and blood transfusions in all of his Tour de France wins. File Photo by Kevin Dietsch/UPI | License Photo

The San Francisco Ballet performs "Don Quixote" under the direction of Helgi Tomasson, in Paris on July 19, 2005. On January 17, 1605, "Don Quixote," by Cervantes, was published. File Photo by William Alix/UPI | License Photo

In 1806, the first baby, James Madison Randolph, was born in the White House. He was the grandson of President Thomas Jefferson.

In 1912, one month late to the party, Captain Robert Falcon Scott arrives at the South Pole. Ronald Amundsen got there first.

In 1920, Alexander Berkman and Emma Goldman, having been deported from the United States, announced that they intend to organize a great society in Soviet Russia, its prime objective would be the promotion of "social revolution in the United States."

In 1929, Popeye, his spinach, and his "guns" debut in the comic strip, Thimble Theatre.

In 1991, Harald V became king of Norway after the death of his father, King Olav V.

In 1995, a powerful earthquake rocked Kobe, Japan, and the surrounding area, killing about 5,500 people.

In 2014, a Taliban suicide attack on a restaurant in Kabul, Afghanistan, killed 21 people, including four U.N. personnel and an International Monetary Fund envoy.

In 2017, President Barack Obama commuted the sentence of Chelsea Manning, the former Army intelligence whistleblower who leaked classified information to WikiLeaks in 2010.

World News // 5 minutes ago
U.N. study shows women working harder, getting poorer during pandemic
Nov. 26 (UPI) -- Women are doing more unpaid work during the COVID-19 pandemic and have a greater danger of slipping into poverty, a report released Thursday from the United Nations shows. 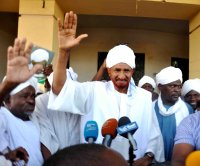