In 1807, the English Parliament abolished the slave trade.

In 1911, a fire at the Triangle Shirtwaist Factory in New York City killed 146 people, mostly female immigrant workers. The tragedy led to the eventual enactment of many state and national workplace safety laws.

In 1954, the Radio Corporation of America began commercial production of color television sets.

In 1965, white civil rights worker Viola Liuzzo of Detroit, 39, was killed on a road near Selma, Ala. Three Ku Klux Klansmen were convicted of violating Liuzzo's civil rights, but not for murder.

In 1975, King Faisal of Saudi Arabia was shot to death at his palace in Riyadh by a "mentally deranged" nephew who was later executed.

In 1990, an arson fire swept an overcrowded social club, the Happy Land, in the Bronx borough of New York City, killing 87 people. Cuban refugee Julio Gonzalez, the arsonist -- whose former girlfriend worked at the club and survived the fire -- was convicted on multiple counts of arson and murder. He died in prison in September 2016.

In 1994, U.S. forces completed a withdrawal from Mogadishu, Somalia, except for a small number of soldiers left behind to provide support for U.N. peacekeepers.

In 2006, an estimated 500,000 people protested in Los Angeles against U.S. House-approved bill that would make it a felony to be in the United States illegally. The legislation, which also led to protests in other cities during this period, did not pass in the Senate.

In 2010, an explosion sank a South Korean warship on patrol in the Yellow Sea, killing 46 sailors. North Korea denied accusations it had torpedoed the ship.

In 2013, Michel Djotodia, leader of the rebel Seleka alliance, declared himself president of the embattled Central African Republic. He resigned in early 2014.

In 2014, Ralph Wilson, owner of the Buffalo Bills, died at the age of 95. Wilson purchased the NFL club -- then a member of the old American Football League -- for $25,000 more than a half-century earlier. 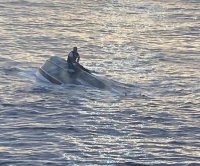