On This Day: Picasso's 'Guernica' returns to Spain

On Sept. 10, 1981, Picasso's "Guernica" was delivered to Spain for the first time. The painter said it could not be taken there until democracy was restored.

On September 10, 1981, Picasso's "Guernica" was delivered to Spain for the first time. The painter said it could not be taken there until democracy was restored. Image courtesy Museo Nacional Centro de Arte Reina Sofía

Iraqi tailor Ahmad Radi sits at his sewing machine as he works on a military jacket at his store along Khayam Street in Baghdad on December 2, 2008. On September 10, 1846, Elias Howe received a patent for the sewing machine. File Photo by Ali Jasim/UPI | License Photo

In a October 24, 2005, handout image from the European Organization for Nuclear Research, two Large Hadron Collider magnets are seen before they are connected together. On September 10, 2008, scientists in a Geneva lab activated the Large Hadron Collider, the world's largest and most powerful subatomic particle accelerator, built over a 14-year period and costing an estimated $8 billion. It had to be shut down after nine days for repairs. File Photo by Maximilien Brice/CERN

Members of the Chicago Teachers Union and their supporters picket in front of Lane College Prep Tech High School on September 10, 2012, in Chicago. Chicago's 25,000 teachers went on strike for the first time in 25 years after the latest contract talks broke down Sunday night with no deal to avert a walkout. File Photo by Brian Kersey/UPI | License Photo

In 1823, Simon Bolivar, who led the wars for independence from Spain in Venezuela, Colombia, Peru and Bolivia, was named president of Peru with dictatorial powers.

In 1981, Pablo Picasso's epic painting, Guernica, which depicted the air bombing of the Spanish town by Nazi Germany and Fascist Italian planes, was delivered to Spain for the first time since it was painted in 1937. The painter, who was living in France, said it could not be returned to Spain until democracy was restored.

In 2002, Switzerland and Timor-Leste joined the United Nations, expanding the membership roll to 191. It eventually increased to 193. 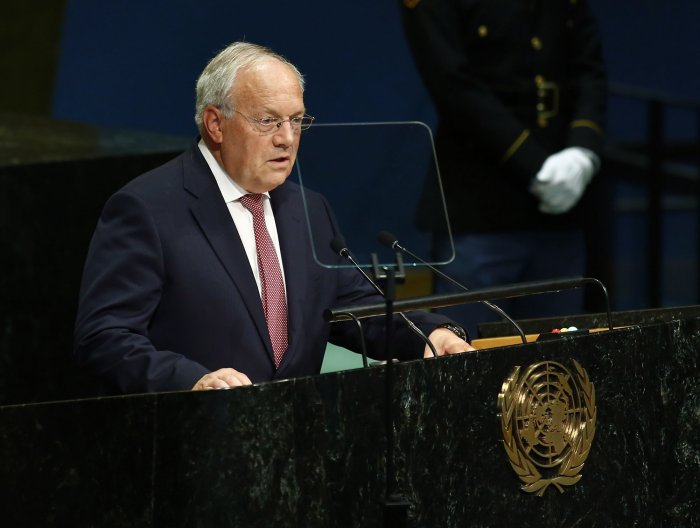 In 2008, scientists in a Geneva lab activated the Large Hadron Collider, the world's largest and most powerful subatomic particle accelerator, built over a 14-year period and costing an estimated $8 billion. It had to be shut down after nine days for repairs.

In 2009, U.S. Rep. Joe Wilson, R-S.C., shouted "You lie!" during President Barack Obama's address on healthcare reform to a joint session of Congress. Wilson's outburst brought sharp criticism from colleagues and he apologized to Obama for "inappropriate and regrettable" behavior and letting "my emotions get the best of me."

In 2011, nearly 200 people died after an overloaded ferry capsized and sank off the coast of Tanzania. More than 600 were rescued.

In 2012, Chicago's first teachers' strike in 25 years began after school officials and union leaders failed to reach a contract agreement. The walkout, which affected 675 schools with 350,000 students, lasted more than a week.

In 2013, Thomas Bach of Germany was elected president of the International Olympic Committee. Bach competed in fencing in the 1976 Games in Montreal.

In 2014, in a speech to the nation, President Barack Obama said the United States and a "broad coalition" will "degrade and ultimately destroy" Islamic State terrorists.

U.S. News // 1 hour ago
Police rescue 30 from human smuggling in Houston
Dec. 4 (UPI) -- Police in Texas have rescued 30 people who were being held hostage as part of a smuggling operation in a Houston home, authorities said.

U.S. News // 2 hours ago
U.N. chief says COVID-19 impact growing; EU proposes int'l pandemics treaty
Dec. 4 (UPI) -- United Nations Secretary-General Antonio Guterres warned the social and economic impact of the pandemic "is enormous and growing" and that a vaccine will not undo the decades of damage the coronavirus has caused.

World News // 2 hours ago
U.S. witness to 1980 South Korea massacre recalls brush with death
NEW YORK, Dec. 4 (UPI) -- The 1980 slaughter of South Korean civilians in Gwangju had an unlikely eyewitness in a former U.S. Peace Corps volunteer who smuggled himself into the city during the military crackdown.

U.S. News // 3 hours ago
Biden to call for 100 days of masking; asks Fauci to be chief medical advisor
Dec. 4 (UPI) -- President-elect Joe Biden said he will ask Americans on his first day in office to wear a mask for 100 days in order to stymie the spread of the coronavirus.

U.S. News // 5 hours ago
U.S. sanctions Iran-linked group over chemical weapons
Dec. 3 (UPI) -- The Trump administration on Thursday sanctioned an Iranian chemical engineering and research group along with its director over accusations of participating in Tehran's chemical weapons program.