In 1565, the city of Rio de Janeiro was established.

In 1692, the notorious witch hunt began in the Salem village of the Massachusetts Bay colony, eventually resulting in the executions of 19 men and women.

In 1932, aviator Charles Lindbergh's son was kidnapped. The child's body was found on May 12. Bruno Hauptmann was convicted of the kidnapping and murder and executed in 1936.

In 1954, Puerto Rican nationalists opened fire from the gallery of the U.S. House of Representatives, injuring five members of Congress.

In 1971, a bomb exploded in a restroom in the Senate wing of the U.S. Capitol, causing $300,000 damage but no injuries. The Weather Underground, a leftist radical group that opposed the Vietnam War, claimed responsibility.

In 1995, the company formerly known as Jerry and David's guide to the World Wide Web incorporates under the name, Yahoo!

In 2003, Khalid Sheik Mohammed, the suspected mastermind of the Sept. 11, 2001, terrorist attacks on the United States, was captured in Pakistan.

In 2004, an interim government took over in Haiti one day after President Jean-Bertrand Aristide fled into exile following a month-long insurrection.

In 2007, Arthur Schlesinger Jr., a two-time Pulitzer Prize-winning historian who served as an adviser in the Kennedy administration, died at age 89.

In 2011, the U.S. Interior Department approved the first deep-water drilling permits in the Gulf of Mexico since a BP offshore explosion and massive oil spill in April 2010.

In 2013, U.S. authorities said smugglers were using air-powered cannons in Mexico to blast drugs over the border into the United States.

In 2014, black-clad, knife-wielding attackers, including two women, killed at least 30 people and wounded about 130 at a railway station in the southwest Chinese city of Kunming. Four of the assailants were killed by police and four others were arrested and charged with murder.

A thought for the day: "Some people can stay longer in an hour than others can in a week." -- William Dean Howells

World News // 10 minutes ago
Russians vote to allow Putin to rule until 2036
July 2 (UPI) -- Russians overwhelming voted to pass constitutional amendments that could allow President Vladimir Putin to remain in power until 2036, according to preliminary results released Thursday.

U.S. News // 8 hours ago
Trump brings back fireworks to Mount Rushmore; faces criticism
July 1 (UPI) -- President Donald Trump is planning a triumphant return of Fourth of July fireworks at Mount Rushmore this weekend, but some activists and experts from South Dakota say they're not welcoming his visit. 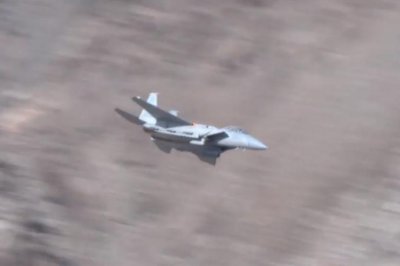