On Oct. 17, 1931, gangster Al Capone is convicted of income tax evasion. It took jurors four days to decide whether the mobster had cheated the Internal Revenue Service out of $215,000. 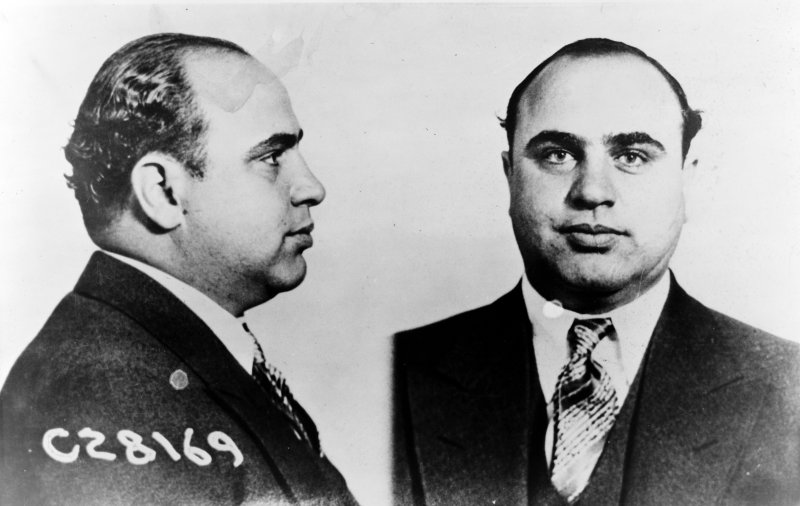 In 1931, gangster Al Capone is convicted of income tax evasion. It took jurors four days to decide whether the mobster had cheated the Internal Revenue Service out of $215,000.

In 1933, German-born theoretical physicist Albert Einstein flees Nazi Germany, settling in the United States and becoming an American citizen in 1940.

In 1945, Juan Peron became dictator of Argentina. He remained in power for 11 years before being overthrown.

In 1949, British steamer Anhui reported taking fire from Communist China's army as it sailed for Hong Kong with 1,400 passengers aboard. Ship's officers said the vessel was under fire for 15 minutes, resulting in three dead and 25 wounded.

In 1964, reconnaissance flights made by the U-2 played a role in obtaining for the United States advance information on Red China's first nuclear blast.

In 1965, following a two-year run that saw more than 51 million people walk through its gates, the 1964/1965 New York World's Fair closed its doors. With a theme of "Peace Through Understanding," the fair was a showcase for science and technology and lives on in the Unisphere, a 12-story high model of the world which dominates Flushing Meadow.

In 1979, Mother Teresa of Calcutta, a Roman Catholic nun who cared for the sick and poor, was awarded the Nobel Peace Prize.

In 1989, the most powerful California earthquake since the legendary tremblor of 1906 struck the San Francisco Bay area at the evening rush hour. At least 63 people were killed and hundreds of others injured.The quake hit just before the scheduled start of Game 3 of the World Series in San Francisco between the Giants and the Oakland A's.

In 2001 the U.S. Congress closed for security sweeps after 321 staff members and police officers tested positive for exposure to anthrax.

In 2010, at least 60 people died and 50 others were hurt in violence that preceded special parliamentary elections in Karachi, Pakistan.

In 2012, Microsoft announced it would launch a news service called MSN News.

In 2013, U.S. President Barack Obama said the just-ended government shutdown "inflicted completely unnecessary damage on our economy" and that the American people "are completely fed up with Washington." Obama called on Republican hardliners in Congress to work to improve government instead of "treating it like an enemy."

A thought for the day: Russian novelist Fyodor Dostoyevsky wrote, "The soul is healed by being with children."

Defense News // 1 hour ago
NASA prototype can diagnose multiple illnesses by analyzing breath
Oct. 22 (UPI) -- NASA researchers have developed a prototype of a technology that can a variety of illnesses and abnormalities just by analyzing compounds in a person's breath.

U.S. News // 4 hours ago
Goldman Sachs pleads guilty in U.S., agrees to pay $2.9B in 1MDB scandal
Oct. 22 (UPI) -- U.S. investment house Goldman Sachs and its Malaysian subsidiary have agreed to pay more than $2.9 billion after admitting to bribery as part of the 1MDB scandal, the U.S. Justice Department announced Thursday.