On Oct. 9, 1967, one day after being captured in the jungles of Bolivia, Marxist revolutionary Ernesto Che Guevara, a leading figure in the 1959 Cuban revolution, was executed by the Bolivian military. 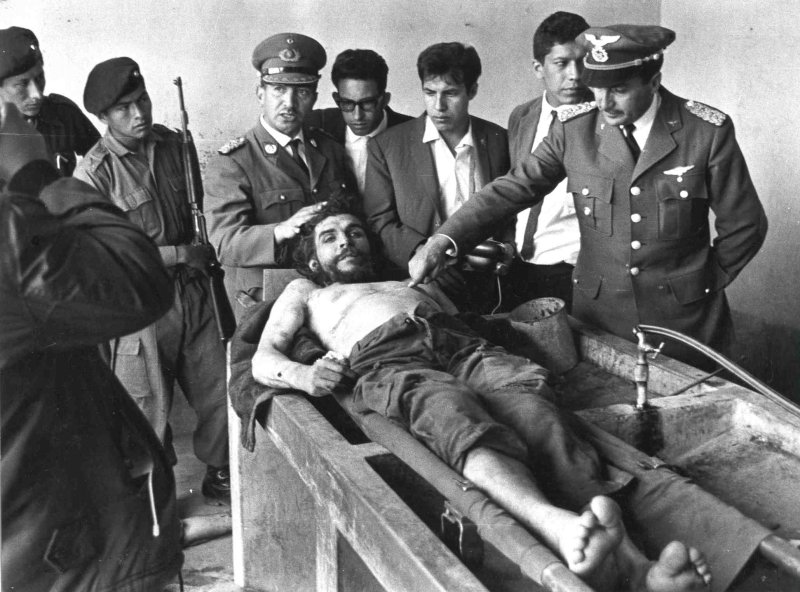 Ernesto "Che" Guevara's body is prepared for public display following his capture and execution by Bolivian troops in 1967. Photo by Freddy Alborta/UPI

In 1888, 40 years after construction began, the Washington Monument opens to the public. Work on the obelisk was halted from 1854 to 1877 due to a lack of funds, internal squabbling within the Washington National Monument Society, and the American Civil War.

In 1919, the Cincinnati Reds win the World Series defeating the Chicago White Sox. Eight members of the White Sox would be accused of intentionally losing games in exchange for money from gamblers in what would become known as the Black Sox Scandal. The players were later found not guilty, though all were banned from the sport for life.

In 1931, gangster Al Capone's Florida spending told at tax evasion trial. The government's contention was that if Mr. Capone was "rich enough to be a moviesque Florida Play-boy, then he certainly must have an income worthy of taxation."

In 1931, the Japanese government endorses military action against Manchuria. The invasion was one of a series of battles and skirmishes which took place in the run-up to the Second Sino-Japanese War.

In 1934, King Alexander of Yugoslavia was assassinated by a Croatian terrorist during a state visit to France.

In 1967, one day after being captured in the jungles of Bolivia where he was waging a guerrilla war, Marxist revolutionary Ernesto Che Guevara, a leading figure in the 1959 Cuban revolution, is executed by the Bolivian military.

In 1974, Oskar Schindler, the German businessman credited with saving 1,200 Jews from the Holocaust, died at the age of 66.

In 1975, Andrei Sakharov, father of the Soviet hydrogen bomb, became the first Soviet citizen to win the Nobel Peace Prize.

In 1992, NASA announced that the unmanned Pioneer spacecraft was apparently lost after orbiting Venus for 14 years.

In 1997, Italian Prime Minister Romano Prodi resigned after Communist members of Parliament withdrew their support for his coalition government. Prodi was also PM from May 2006 until January 2008.

In 2002, as stock prices continued to fluctuate wildly, the Dow Jones industrials closed at 7,286.27, a five-year low.

In 2009, U.S. President Barack Obama was awarded the Nobel Peace Prize for his "extraordinary efforts to strengthen international diplomacy and cooperation between peoples."

In 2012, a U.S. Department of Homeland Security report said Transportation Security Administration screeners routinely failed to check bags for explosives at Honolulu International Airport. It said inspectors found "a lack of effective and consistent supervision of TSA screeners by their managers, as well as inconsistent adherence to operating procedures."

U.S. News // 6 hours ago
Rare nor'easter could bring lingering taste of fall
Tumbling temperatures this weekend could be here to stay. Canadian air, combined with a rare nor'easter could keep it feeling like September in the Northeast into next week.

U.S. News // 6 hours ago
Tropical rainfall to funnel into Texas, Mexico threatening flooding
Meteorologists warn that a tropical system will continue to bring flooding rainfall through southern Texas and northern Mexico in the coming days before impacting yet another portion of the United States midweek.