On Sept. 22, 1975, U.S. President Gerald Ford escaped a second assassination attempt in 17 days, this one by self-proclaimed revolutionary Sara Jane Moore, who tried to shoot him as he walked from a San Francisco hotel. 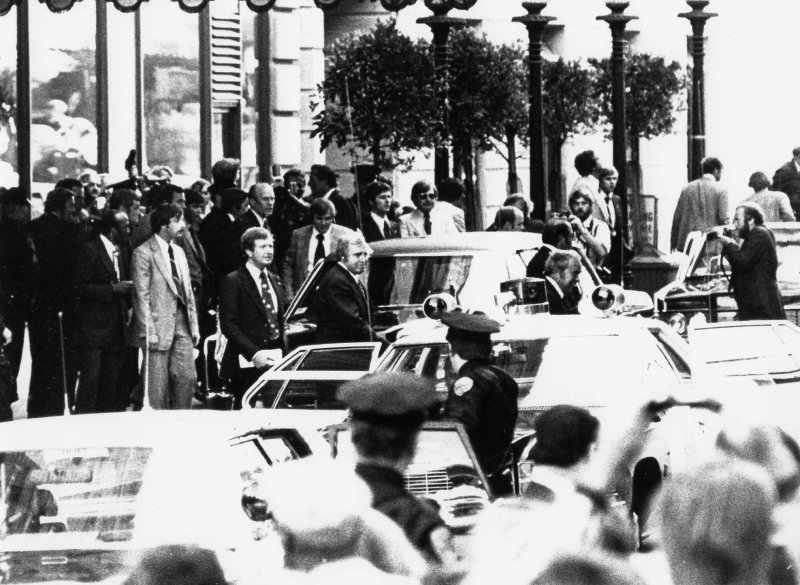 In 1776, the British hanged American Revolutionary War hero and patriot Nathan Hale. His famous last words were, "I only regret that I have but one life to lose for my country."

In 1927, Jack Dempsey muffed a chance to regain the heavyweight championship when he knocked down Gene Tunney but failed to go to a neutral corner promptly, thereby delaying the referee's count and giving the champ time to get up.

In 1949, the U.S. nuclear monopoly ended when the Soviet Union detonated its first atomic bomb.

In 1975, U.S. President Gerald Ford escaped a second assassination attempt in 17 days, this one by self-proclaimed revolutionary Sara Jane Moore, who tried to shoot him as he walked from a San Francisco hotel. Her shot, deflected by ex-Marine Oliver Sipple, a bystander who grabbed her arm, slightly wounded a man in the crowd. Moore served 32 years of a life prison sentence. She was released in 2007 at the age of 77. Lynette "Squeaky" Fromme, convicted in a Sept. 5, 1975, assassination attempt in Sacramento, was paroled in 2009, at age 60, after 34 years in prison.

In 1980, long-standing border disputes and political turmoil in Iran prompted Iraqi President Saddam Hussein to launch an invasion of Iran's oil-producing province of Khuzestan, touching off an eight-year war.

In 1989, Irving Berlin, whose long list of enduring songs include "God Bless America" and "White Christmas," died in his sleep at his home in New York City at the age of 101.

In 2005, the U.S. Senate Judiciary Committee voted 13-5 to recommend the nomination of John Roberts as chief justice of the United States, succeeding the late William Rehnquist. A week later, the full Senate confirmed the nomination.

In 2008, officials at China's health ministry said nearly 53,000 children, most of them younger than 2 years old, had been sickened by milk powder tainted with an industrial chemical. At least four children died. Ten Asian and African nations, including Japan, temporarily banned Chinese dairy products.

In 2010, a Miami appeals court affirmed the adoption of two foster children by a gay couple, ruling Florida's ban on same-sex adoption was unconstitutional.

In 2012, Washington state health authorities said they had shipped more than 20,000 face masks to several counties where smoke from wildfires made breathing difficult.

In 2013, a Chinese People's Court announced that former political star Bo Xilai was sentenced to life in prison for bribery, embezzlement and abuse of power. Bo had been a leading figure in the Chinese Communist Party.

A thought for the day: "The problem is that the people with the most ridiculous ideas are always the people who are most certain of them." -- Bill Maher

U.S. News // 5 hours ago
Heavy storms to slice through heat, humidity in the Northeast
June 26 (UPI) -- Summertime heat and humidity have taken a hold of the Northeastern states for the final weekend of June. A strong cold front is on the way to cut steamy conditions.

World News // 6 hours ago
India's COVID-19 cases highest in 4 months, but deaths stable
June 26 (UPI) -- COVID-19 cases in India are surging to the highest level in four months but the infections are a fraction at the peak of the pandemic in May 2021 when the Delta subvariant was dominant though deaths now remain low.