"We Are the World" is released worldwide to raise funds for Africa, Warner Bros. drops Charlie Sheen from "Two and a Half Men" ... on this date in history.

Original caption: Nuns of the New York Roman Catholic Archdiocese march in orderly lines through the streets of Harlem on March 14, 1965 during a mass demonstration of support for civil rights workers in Selma, AL. Some 300 nuns marched in the demonstration which included more than 10,000 persons. Marching up Seventh Avenue, one of the main thoroughfares of the nation's largest Negro community. UPI File Photo

"We Are the World" album cover.

In 1985, We Are the World, a song composed by Michael Jackson and Lionel Richie and recorded by a series of high-profile music stars was released worldwide with the goal of generating funds for the USA for Africa charity. The song and related promotions eventually raised about $63 million.

In 2011, Warner Brothers removed actor Charlie Sheen from the highly rated show Two and a Half Men, saying his "statements, conduct and condition prevented him from performing his essential duties."

In 2014, Saudi Arabia designated several organizations as terrorist groups, including the Muslim Brotherhood, of which ex-Egyptian President Mohamed Morsi is a member.

U.S. News // 2 hours ago
COVID-19 rules enforced, Oval Office redesigned as Biden moves in to White House
Jan. 20 (UPI) -- The incoming Biden administration is making changes to how business as usual will be conducted in the White House, including enforcing stricter COVID-19 regulations compared to its Trump administration predecessor. 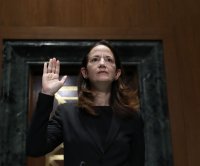 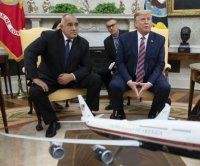 U.S. News // 16 hours ago
Biden signs executive orders on COVID-19, climate change, DACA
Jan. 20 (UPI) -- As one of his first acts as president, Joe Biden on Wednesday signed a flurry of executive orders that will set the tone for his new administration.