Catastrophic earthquake hits Japan, Korean airliner shot down over the U.S.S.R., scientists find the Titanic ... on this date in history

Scientists found the sunken Titanic off Newfoundland in the North Atlantic on Sept. 1, 1985. This postcard-size photo of the British luxury liner leaving the port in Southhampton, England, April 10, 1912, on its ill-fated voyage was taken by chief docks engineer Henry William Clarke. In 1968, the photo was donated to the Vancouver (British Columbia) Maritime Museum by Clarke's daughter Mrs. R.H. Hooper of Richmond, B.C. Photo by Henry W. Clarke/UPI File

The Titanic sank in the Atlantic in 1912 and was found by scientists south of Newfoundland on Sept. 1, 1985. (This scale model of the British luxury liner is shown at a museum in Chicago Feb. 15, 2000.) File Photo by Ray Foli/UP | License Photo

Lily Tomlin of the cast of "Grace and Frankie" attends its premiere in Los Angeles, April 29, 2015. She turns 76 on Sept. 1. File Photo by Jim Ruymen/UPI | License Photo

In 1715, France's King Louis XIV died after ruling the country for 72 years, the longest reign for a French monarch.

In 2006, a fiery airport crash of a Russian-made Tupolev 154 airliner in Mashland, Iran, left 29 people dead, but 148 passengers survived.

In 2011, embattled Libyan leader Moammar Gadhafi, believed to be holed up in a desert stronghold after his forces were beaten in Tripoli, said in a television interview he was prepared for a "long drawn-out war" and proclaimed, "Let Libya burn." (He was killed seven weeks later.)

In 2013, U.S. Secretary of State John Kerry said there was new evidence that the Syrian government used sarin gas in a chemical weapons attack that killed hundreds of people in August.

In 2014, Bo Porter, in his second season as manager of the Houston Astros, was fired. The Astros, with a record of 59-79, were 25 games behind the America League West-leading Los Angeles Angels. (Porter became a coach with the Atlanta Braves in 2015.)

A thought for the day: "We must not allow other people's limited perceptions to define us." -- Virginia Satir

World News // 50 minutes ago
South African rhino poaching increased 50% this year, still lower than before pandemic
July 31 (UPI) -- The was a 50% increase in the number of rhinoceroses killed in the first six months of 2021 in South Africa compared to the same period last year.

Top News // 9 hours ago
UPI Almanac for Saturday, July 31, 2021
On July 31, 1999, NASA intentionally crashes the Lunar Prospector spacecraft into the moon with the hopes of discovering evidence of water. 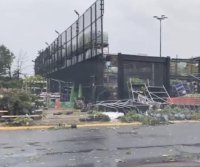 U.S. News // 17 hours ago
EF3 tornado ravages Philadelphia suburb amid mass casualty event
July 30 (UPI) -- One day after a destructive tornado struck eastern Pennsylvania, National Weather Service meteorologists confirmed that an EF3 tornado had torn through the area with peak winds of up to 140 mph.

U.S. News // 17 hours ago
Canadian doctor who used own sperm to impregnate patients to pay $10M
July 30 (UPI) -- A fertility doctor who used the wrong sperm -- in some cases, his own -- to impregnate at least 100 women in Canada, has agreed to settle a class-action lawsuit for $10 million.

Defense News // 19 hours ago
Hypersonic missile booster rocket fails to ignite in test
July 30 (UPI) -- In a test of a hypersonic booster rocket, a test rocket was successfully released from a B-52H bomber but failed to ignite, the U.S. Air Force said this week.
Advertisement