A historic handshake in space … on this date in history.

A Boeing 747, reconstructed from the wreckage of TWA Flight 800, is shown July 16, 2008, at the National Transportation Safety Board Training Academy in Ashburn, Va., where it is used for training new investigators. The aircraft crashed into the Atlantic after passing over Long Island in New York July 17, 1996. All 230 people aboard were killed. File Photo by Patrick D. McDermott/UPI | License Photo

Workmen assist in the the recovery of part of the hull of TWA Flight 800 off the coast of New York City in August 1996. The airliner crashed on July 17, 1996, killing all 230 people aboard. File Photo by Ezio Petersen/UPI | License Photo

U.S. President Barack Obama, speaking at the White House July 18, 2014, called for a "credible international investigation" to determine why Malaysia Airlines Flight 17 was shot down over Ukraine the previous day. Obama said: "Nearly 300 innocent lives were taken -- men, women, children, infants -- who had nothing to do with the crisis in Ukraine. Their deaths are an outrage of unspeakable proportions." File Photo by Kevin Dietsch.UPI | License Photo

Brazilian police officers who worked at the scene of a July 17, 2007, airliner crash at Congonhas Airport in Sao Paulo carry their country's flag into Maracana Stadium in Rio de Janeiro for the closing ceremony of the Pan Am Games 12 days later. File Photo by Heinz Ruckemann/UPI | License Photo

German Chancellor Angela Merkel, on a U.S. visit, speaks at a news conference in the East Room of the White House Feb. 9, 2015. Photo by Pat Benic/UPI | License Photo

In 1955, Arco, Idaho, a town of 1,300 people, became the first community in the world to receive all its light and power from atomic energy. Also, Disneyland opened in Anaheim, Calif.

In 2006, an earthquake under the Indian Ocean triggered a tsunami that struck the Indonesian island of Java, killing about 700 people.

In 2007, a Brazilian Airbus airliner skidded off a runway as it landed at Sao Paulo's Congonhas Airport and crashed into a building. Authorities placed the death toll at 200.

In 2009, Walter Cronkite, television news broadcaster often referred to as the most trusted man in America, died at age 92.

In 2012, the Boy Scouts of America announced a policy of banning homosexuals from membership would remain in effect. (The restriction was removed in 2013.)

In 2014, Malaysia Airlines Flight 17 carrying 298 people was shot down over rebel-controlled territory in eastern Ukraine near the Russian border. All aboard the Boeing 777 were killed, including dozens of children.

A thought for the day: "Democracy must be our answer to terrorism." -- Angela Merkel

World News // 3 hours ago
Organizers bar consumption, sale of alcohol at Tokyo Summer Olympics
June 23 (UPI) -- With one month to go before the start of the postponed 2020 Summer Olympics in Tokyo, organizers are planning to unveil rules against several things to mitigate COVID-19 infections at the Games -- including no alcohol.

World News // 8 hours ago
Lebanon may need a savior, but it likely won't be Syria this time
BEIRUT, Lebanon, June 23 (UPI) -- Lebanon, which has for decades relied on outside powers to help solve its problems, is again waiting for "a savior" to pull it from its worst political and financial crisis since the 1975-90 civil war. 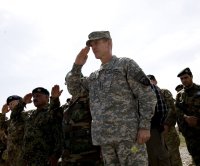 Top News // 8 hours ago
On This Day: Gen. McChrystal resigns after magazine interview
On June 23, 2010, U.S. Army Gen. Stanley McChrystal resigned as commander of U.S. and NATO troops in Afghanistan.

U.S. News // 8 hours ago
FAA unveils $8B in grants for airports impacted by pandemic
June 23 (UPI) -- The Federal Aviation Administration has announced it will be awarding $8 billion in grants to aid airports suffering amid the coronavirus pandemic.
Advertisement