A massive bombing of Tokyo, Barbie's debut in stores, re-election of Spain's PM ... on this date in history. 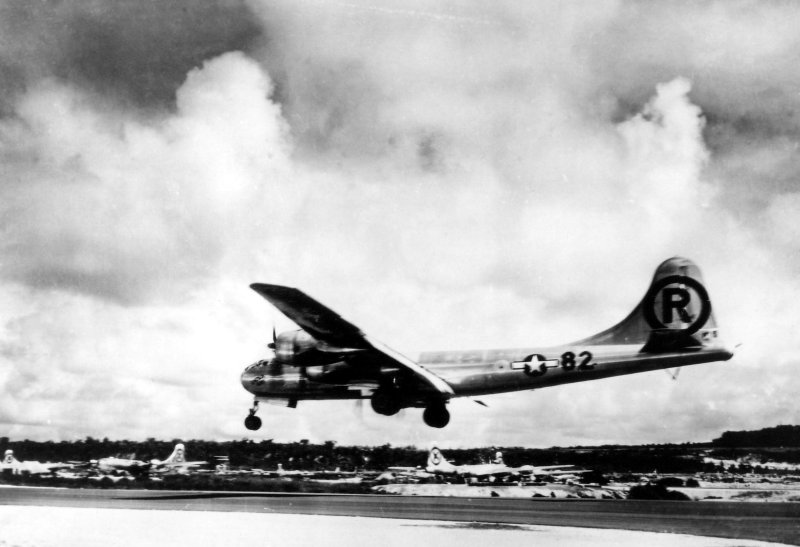 U.S. B-29s conducted a massive raid on Tokyo March 9, 1945. The attack killed tens of thousands of people. (This picture shows the B-29 "Enola Gay" preparing to land on the island of Tinian in the Pacific after dropping an atomic bomb on the Japanese city of Hiroshima Aug. 6, 1945.) | License Photo

In 1841, the U.S. Supreme Court ruled, with one dissent, that the African slaves who seized control of the Amistad slave ship had been illegally forced into slavery and thus were free under U.S. law.

In 1862, a battle between ironclad ships -- the Union's Monitor and the Confederate's Merrimac (renamed the Virginia) -- ended indecisively off Hampton Roads, Va.

In 1864, Gen. Ulysses S. Grant was appointed commander in chief of Union forces in the U.S. Civil War.

In 1959, Barbie, which became a perennially popular doll, made its debut in stores.

In 1992, a federal judge in New York announced a final $1.3 billion agreement to settle civil suits growing out of the 1989 collapse of Drexel Burham Lambert, once the most powerful firm on Wall Street.

In 2004, John Allen Muhammad was sentenced to death for his part in one of 10 Washington-area sniper killings in 2002. (Muhammad was executed in 2009.)

In 2005, Dan Rather stepped down as anchor and managing editor of "CBS Evening News." His departure followed acknowledgment of major flaws in a broadcast about U.S. President George W. Bush's National Guard service.

In 2006, scientists reported evidence of water on a Saturn moon.

In 2009, U.S. President Barack Obama lifted the U.S. limit on federal funding for embryonic stem-cell research, calling it an important advancement in the cause of science in the United States.

In 2014, William Clay Ford Sr., grandson of Ford Motor Co founder Henry Ford and owner of the Detroit Lions NFL team, died at his suburban Detroit home at the age of 88.

A thought for the day: " Leave the matter of religion to the family ... the church and the private school, supported entirely by private contributions. Keep the church and state forever separate." -- Ulysses S. Grant

U.S. News // 19 minutes ago
Two months into 2022 season, nary a hurricane so far in the Atlantic basin
By the time the third month of the hurricane season began, the Atlantic basin had long gone quiet without any tropical activity at all since just prior to the July 4th holiday. However, that could change.

Top News // 4 hours ago
UPI Almanac for Monday, Aug. 8, 2022
On Aug. 8, 1988, the first night game at Chicago's Wrigley Field was played. The park was the last major league stadium to add lights for night baseball.

U.S. News // 6 hours ago
Police ask for public's help to find car linked to 4 murdered Albuquerque Muslim men
Aug. 8 (UPI) -- Officials and authorities in Albuquerque, N.M., are calling on the public to help track down a dark silver sedan described as a vehicle of interest in the recent deaths of four Muslim men in the city.