COLOMBO, Sri Lanka, Sept. 28 (UPI) -- Sri Lankan military officials said troops fired on several displaced Tamils trying to escape from a camp where they have been kept since May.

Police said three of the civilians suffered gunshot wounds in the incident Saturday, the Times of London reported. They are among the nearly 280,000 displaced Tamils kept in the Manik Farm camp in north Sri Lanka's Vavuniya district since the military defeated the Tamil Tiger rebels in May.

A pro-Tamil Tiger Web site said at least six people were injured in the firing. The report said the victims were collecting firewood and not trying to escape.

The military said the civilians threw stones at the soldiers as they tried to escape.

"The army fired in self defense," said spokesman Udaya Nanayakkara, adding 19 of the Tamils were arrested.

The continued presence of such a large number of civilians in these camps where facilities are inadequate has raised international concerns and brought criticism against the Sri Lankan government. The government has promised to resettle the civilians by the end of January.

U.S. News // 31 minutes ago
Man charged with murder, assault in Portland hit-and-run rampage
Jan. 28 (UPI) -- A district attorney in Oregon has charged a 64-year-old man with murder, accusing him of driving his car into several people, including a grandmother who died in the vehicular attack. 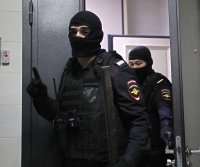