Man gets 25 years for killing dog

Alex Castro was sentenced Friday for beating Copper to death with a hammer in 2007. His sentence was influenced by two former violent felony convictions, Deputy District Attorney Kevin Smith said.

"Despite the defendant's claims he was getting too much time for 'only killing a dog,' he is getting this sentence for the violence in his past," Smith told The San Jose Mercury in a story published Saturday.

In 1994, Castro was convicted of serious bodily injury for choking a man until he turned blue and nearly died, and in 1982, he was convicted of assault with a deadly weapon for striking two men with a tire iron multiple times, a probation report said.

Castro, 48, also had 20 misdemeanor convictions, including driving under the influence and driving with a suspended license.

Joanie Gonzalez, who owned 10-year-old Copper, a cocker spaniel, said she was "satisfied" with the verdict.

U.S. News // 1 hour ago
Spirit Airlines cancels half of all flights amid ongoing system, staff troubles
Aug. 5 (UPI) -- For the fifth day in a row, Spirit Airlines on Thursday canceled hundreds of flights due to a variety of problems facing the budget carrier. 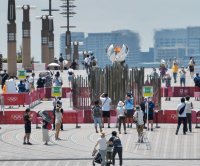