Sen. Max Baucus (D-MT) speaks to members of the media after meeting with a bipartisan group of Senators to discuss health care reform, in Washington on September 14, 2009. UPI/Kevin Dietsch | License Photo

Sen. Max Baucus (D-MT) speaks to members of the media after meeting with a bipartisan group of Senators to discuss health care reform, in Washington on September 14, 2009. UPI/Kevin Dietsch | License Photo

WASHINGTON, Sept. 16 (UPI) -- Sen. Max Baucus, D-Mont., says his healthcare proposal doesn't have bipartisan support yet, but he expects it will by the time it hits the Senate floor.

Baucus introduced his 10-year, $856 billion plan online Wednesday as a way for the Senate Finance Committee, which he leads, to begin considering it next week.

"No Republican has offered his or her support at this moment. But I think by the time we get the final passage in this committee, you'll find Republican support," Baucus said during a news conference. "This is a bill that should enjoy broad support. It is common sense. It is a balanced bill."

Unlike the four other bills in Congress -- three in the House and one in the Senate -- Baucus's plan does not include a public option. Instead it proposes non-profit healthcare cooperatives as an alternative to private insurance.

Baucus said his plan meets the criteria outlined by President Barack Obama last week during his address on healthcare to a joint session of Congress.

He said his plan "ensures choice and competition so every American can find quality, affordable coverage that cannot be taken away."

Baucus acknowledged "honest and principled differences" about aspects of his bill exist and it may not satisfy everyone.

"But at the end of the day, we all share a common purpose -- that is to make the lives of Americans better tomorrow than they are today, and to get healthcare reform done, which means the time to come for action is now," Baucus said.

"This is probably one of the largest pieces of social legislation in American history since the Depression," he said. "It is comprehensive. It is complex. It's just takes time to fully fathom, put the pieces together, to understand and then make a suggestion to make it better."

U.S. News // 52 minutes ago
Aon, Willis $30B merger canceled after Justice Department suit
July 26 (UPI) -- Aon and Willis Towers Watson on Monday called off a $30 billion deal that, had it gone through, would have resulted in the world's largest insurance broker. 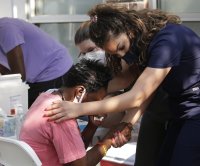 U.S. News // 2 hours ago
Biden says 'long COVID' patients could qualify for having disability
July 26 (UPI) -- President Joe Biden said those who experience long-term health problems from COVID-19 could qualify as having a disability Monday during remarks marking the 31st anniversary of the Americans with Disabilities Act.
Advertisement