STOCKHOLM, Sweden, Sept. 4 (UPI) -- Officials are urging Swedish elk hunters to shoot on sight any marauding raccoon dogs they might come across.

The Swedish National Environmental Protection Agency has declared open season on the animal, which is related to dogs, wolves and foxes though it resembles a racoon, and is described as a pest comparable to the American mink or the Spanish slug, The Local reported.

It's a known carrier of tapeworm and rabies, and can threaten a species of birds.

Swedish authorities have in recent years led a successful fight to keep the raccoon dog population, which is indigenous to China, Korea and Siberian Russia, to a minimum.But a new threat has emerged after more than 20 recorded sightings of the animal in neighboring Denmark.

U.S. News // 33 minutes ago
NCAA will not hold events in states that discriminate against trans students
April 13 (UPI) -- The National Collegiate Athletic Association Board of Governors said it will only hold college championships in states where transgender student-athletes can participate without discrimination.

World News // 2 hours ago
U.N. chief calls for wealth tax as pandemic worsens global inequalities
April 13 (UPI) -- United Nations Secretary-General Antonio Guterres called for the creation of a wealth tax on those who have profited during the COVID-19 pandemic as he warned global inequalities continue to grow as infections increase.

World News // 3 hours ago
Report: North Korea may have almost 250 nuclear weapons by 2027
SEOUL, April 13 (UPI) -- North Korea's nuclear arsenal will continue to grow over the next several years, reaching as many as 242 nuclear weapons and dozens of intercontinental ballistic missiles by 2027.

U.S. News // 4 hours ago
Daunte Wright shooting: Officer ID'd amid more clashes in Minnesota
April 13 (UPI) -- Police in Minneapolis clashed with protesters for a second straight night after authorities identified the officer who fatally shot a 20-year-old Black man during a traffic stop on Sunday as Kim Potter. 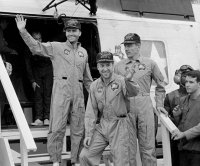