Levi Johnston, who had a child with Palin's daughter, Bristol, told Vanity Fair magazine for an issue hitting nationwide stands Sept. 8 that the then-governor told the young couple last year that she wanted to hide Bristol's unexpected pregnancy from the public.

"Sarah told me she had a great idea: we would keep it a secret -- nobody would know that Bristol was pregnant," Johnston said. "She told me that once Bristol had the baby she and Todd would adopt him. That way, she said, Bristol and I didn't have to worry about anything ... . We both kept telling her we were definitely not going to let her adopt the baby."

Johnston also said Palin started talking about quitting her position as governor after she and John McCain lost the 2008 election.

"I had assumed she was going to go back to her job as governor, but a week or two after she got back she started talking about how nice it would be to quit and write a book or do a show and make 'triple the money,'" he said. "She started to say it frequently, but she didn't know how to do it."

U.S. News // 48 minutes ago
Biden, Senate Democrats to plot way forward for $1.9T COVID-19 stimulus plan
March 2 (UPI) -- President Joe Biden will speak with Democrats on Tuesday to discuss designs on moving his $1.9 trillion American Rescue Plan forward, which was passed by the House but must clear hurdles in the Senate this week.

Top News // 7 hours ago
On This Day: Supreme Court allows Westboro church to picket funerals
March 2 (UPI) -- On March 2, 2011, the U.S. Supreme Court ruled that a Kansas church had a right to stage a peaceful protest at the funeral of a U.S. Marine killed in Iraq. 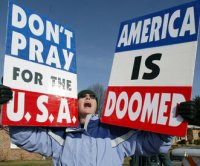 Top News // 7 hours ago
UPI Almanac for Tuesday, March 2, 2021
On March 2, 2011, the U.S. Supreme Court ruled that a Kansas church had a right to stage a peaceful protest at the funeral of a U.S. Marine killed in Iraq.