Jefferson, 62, was indicted in 2007, about two years after government agents found $90,000 in his freezer. The cash was payment from an FBI informant in a transaction captured on video, prosecutors alleged during Jefferson's trial, which began June 16.

The jury in Alexandria, Va., deliberated five days before finding Jefferson guilty Wednesday on 11 of 16 counts against him, The Washington Post reported.

Jefferson was charged with abusing his congressional authority to solicit and receive hundreds of thousands of dollars in exchange for promoting products and services in Africa, especially Nigeria. He maintained he was acting as a private businessman and pleaded not guilty to charges of racketeering, money laundering, wire fraud and obstruction of justice.

Defense lawyers argued during the trial that Jefferson had been "stupid" and used "awful judgment" but was not guilty of a crime.

Jefferson, who lost his bid for re-election in 2008, could go to prison for the rest of his life, the Post said. 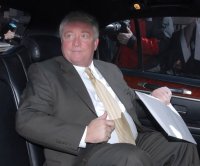