BAGHDAD, May 11 (UPI) -- Information was being gathered about what led to the shooting deaths of five U.S. troops Monday at Camp Liberty in Baghdad, Pentagon chief Robert Gates said.

"(If) the preliminary reports are confirmed, such a tragic loss of life at the hands of our own forces is a cause for great and urgent concern," Gates said during a news conference in Washington. "And I can assure you that it will get this department's highest priority attention."

Initial reports indicated the shooter killed himself but military officials said a U.S. soldier suspected of being involved in the shooting at a clinic for soldiers suffering from war stress was in custody.

"Any time we lose one of our own, it affects us all," a military spokesman said.

At least three other people were wounded, CNN reported.

President Barack Obama was "shocked by the news of this incident and will press to ensure that we fully understand what happened at the clinic, and that we are doing everything we can to ensure that our men and women in uniform are protected," White House Press Secretary Robert Gibbs said.

Police told the Kuwaiti news agency KUNA they discovered the bodies of three Iraqi citizens in the Tarmiya district of Saladin province. The three were kidnapped several days ago.

NEW YORK, May 11 (UPI) -- Human rights advocates Monday called on Libya to investigate the death of a terror suspect in Tripoli that authorities have said was a case of suicide.

Ali Mohamed al-Fakheri, also known as Ibn al-Sheikh al-Libi, was found dead in his cell in Abu Salim prison in Tripoli, Human Rights Watch said in a news release Monday. Al-Libi had previously been held in secret U.S. and Egyptian detention facilities from late 2001 to at least 2005, HRW said.

Citing a declassified CIA document and a U.S. Senate report, HRW said al-Libi was tortured in Egypt before providing what turned out to be false information about a link between al-Qaida and former Iraqi dictator Saddam Hussein.

The information was used in former Secretary of State Colin Powell's presentation at the United Nations making the case for the March 2003 invasion of Iraq.

"The death of Ibn al-Sheikh al-Libi means that the world will never hear his account of the brutal torture he experienced," Sarah Leah Whitson, Middle East and North Africa director at Human Rights Watch, said. "So now it is up to Libya and the United States to reveal the full story of what they know, including its impact on his mental health."

Al-Libi was turned over from U.S. custody to Libya in late 2005 or early 2006 and was detained at Abu Salim prison, where officials said he had been sentenced to life imprisonment, the release said.

HRW called on Libya to disclose what it knows about al-Libi's treatment in U.S. and Egyptian custody.

CLEVELAND, May 11 (UPI) -- Suspected former death camp guard John Demjanjuk has begun the first leg of his trip to Germany to face his Nazi past, officials said.

Demjanjuk was placed on a medical airplane Monday for his flight to Munich, The (Cleveland) Plain Dealer said. The 89-year-old Ukraine native is expected to stand trial on accessory charges in the deaths of 29,000 Jews at a Nazi death camp in 1943.

A U.S. Supreme Court justice last week denied Demjanjuk's attempt to block his deportation. He had claimed that going back to Germany would amount to torture since he suffers from chronic kidney disease and leukemic bone marrow disease.

Demjanjuk's family, including his children and grandchildren, started arriving at this Seven Hills, Ohio, home about 10 a.m. Monday, with his son, John Jr. arriving later, The Plain Dealer said.

The fire in Santa Barbara, Calif., was contained by crews with the help of foggy, humid weather, the Los Angeles Times reported. The size of the fire remained at 8,700 acres and no other structures were burned since Sunday, when the count of destroyed structures had reached 70, the newspaper said.

The fire, which erupted last Tuesday, has cost $10.8 million to fight, the Times said.

Fire officials say they expect sundowner winds Monday evening, which could cause some hot spots to flare up.

"We're going to have lookouts everywhere," said Lee Bentley, a spokesman for the interagency team fighting the fire. "We're going to use all the resources we can to make sure this fire doesn't get out of hand again." 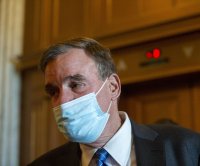 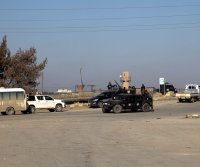 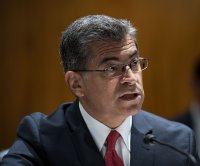