ALBANY, N.Y., April 27 (UPI) -- A letter written by U.S. President Andrew Jackson in 1824 has been recovered in New York after being stolen from a state site, officials said.

The stolen letter was found up for sale on the online auction site, Profiles in History, by University of Tennessee historian Timothy Coens in March.

The recovered letter was written by Jackson to his supporter, Samuel Swartwout. Investigators have tied the document's theft to a probe into convicted record raider Daniel Lorello.

"New York is privileged to house one of the world's great archives of historic documents," the state official said, adding Jackson's "writings are precious artifacts that must be preserved for future generations." 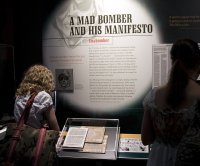 Top News // 6 hours ago
UPI Almanac for Sunday, Sept. 19, 2021
On Sept. 19, 1995, The Washington Post published a manifesto by Theodore Kaczynski, the so-called Unabomber, who carried out 16 bombings.

U.S. News // 17 hours ago
California synagogue shooter pleads guilty to federal charges
Sept. 18 (UPI) -- A California man has pleaded guilty in federal court for his deadly attack on a synagogue and attempt to set a mosque on fire.