WASHINGTON, April 26 (UPI) -- Respondents to a national poll gave U.S. President Barack Obama solid marks for his handling of the economy and for keeping his campaign promises.

There was decidedly less support, however, for Obama's decision to release previously secret memos on the interrogation of terrorism suspects, A Washington Post-ABC News Poll released Sunday indicated.

Just more than half of the 1,072 people interviewed said they supported Obama's release of the memos, while a third strongly opposed the decision.

Obama's overall rating remained high, with 69 percent of those polled approving of his job performance, especially on the economy where he maintained more than a 2-to-1 advantage over congressional Republicans on the issue, the Post reported.

Public optimism about the country's direction remained on the rise, although few of those polled said they believed Obama's initiatives have energized their communities or their finances.

The telephone survey conducted April 21-April 24 had a margin of error of 3 percentage points.

U.S. News // 3 hours ago
Persistent wintry weather to pester the northeastern U.S.
Winter lovers in the northeastern United States have been disappointed by a generally mild January thus far, but forecasters say a return to conditions more typical of the first month of the year is underway.

World News // 3 hours ago
Mainland China on high alert after COVID-19 outbreak near N. Korea
Jan. 17 (UPI) -- Mainland China is on high alert for another coronavirus outbreak wave, six days after the one-year anniversary of the first fatality in Wuhan that has surpassed 2 million fatalities and 95 million cases worldwide.

World News // 4 hours ago
Alexei Navalny detained upon returning to Russia after treatment for poisoning
Jan. 17 (UPI) -- Russian opposition leader Alexei Navalny was detained as he returned to Moscow on Sunday after recovering from being poisoned. 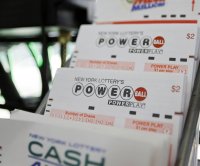 U.S. News // 7 hours ago
Powerball pot grows to $730M after no winner in Saturday's drawing
Jan. 17 (UPI) -- The Powerball jackpot has grown to an estimated $750 million, the fourth highest in the 28-year-history of the game, as no winner was announced from Saturday's drawing.