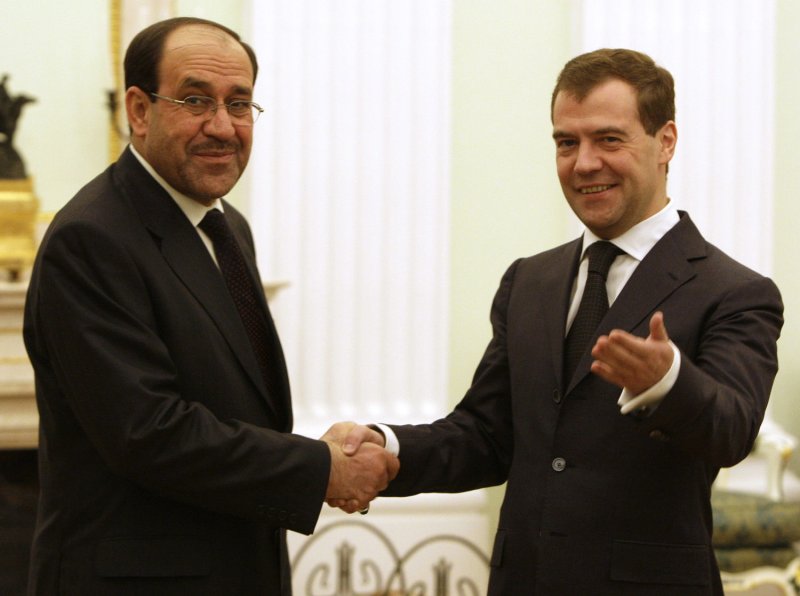 Russian President Dmitry Medvedev (R) welcomes Iraqi Prime Minister Nouri al-Maliki before their meeting in the Kremlin in Moscow on April 10, 2009. Both countries will consider restoring contracts they agreed to before the U.S.-led invasion of Iraq in 2003. (UPI Photo/Anatoli Zhdanov) | License Photo

"We are seeking to attract Russian companies to the Iraqi market and involve them in various projects," he said at a news conference after the discussions.

Putin said that Maliki has "boosted confidence" in Iraq by curbing violence. He promised to send a Russian delegation to Iraq soon to continue the discussions.

Russian Energy Minister Sergei Shmatko participated in the talks. He said that Technopromexport, the leading Russian power construction company, and Stroytransgaz, an engineering and construction firm, could be involved in Iraqi projects.

Top News // 1 hour ago
On This Day: Wuhan, China, goes into lockdown due to coronavirus
Jan. 23 (UPI) -- On Jan. 23, 2020, the Chinese government issued a travel ban for all residents of Wuhan, the epicenter of a novel coronavirus outbreak.

Top News // 1 hour ago
UPI Almanac for Saturday, Jan. 23, 2021
On Jan. 23, 2020, the Chinese government issued a travel ban for all residents of Wuhan, the epicenter of a novel coronavirus outbreak.